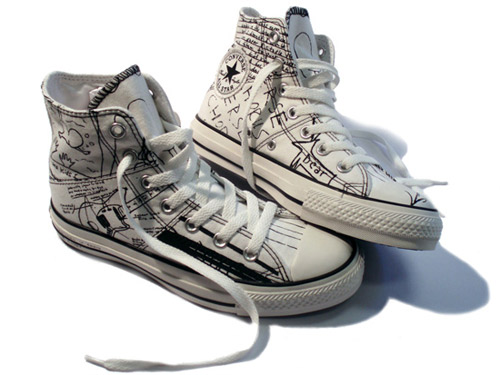 Never one for Dr. Martens boots, deceased Nirvana frontman Kurt Cobain — like Mos Def and many a basketball superstar before him — will receive the royal sneaker treatment as Converse prepares to display the rocker’s lyrics, drawings, and other writings across Chuck Taylor high and low tops, Jack Purcells, as well as Cobain’s beloved One Star model, the Daily Swarm reports.

The limited edition series, featuring journal entries pulled from 2002’s revealing book Journals, is in production now and will release this summer as part of Converse’s 100th anniversary celebration.

The project is in full cooperation with Cobain’s estate (i.e., Courtney Love), but will not feature Nirvana tunes in advertisements. Either way, it appears Cobain may be on the path to reclaiming his Richest Dead Guy crown and consumers are on their way to wearing a dead guy’s sneakers. Kinda icky, don’t you think?