As flurries dumped outside, Kim Deal and crew kicked off their first nationwide tour behind new LP Mountain Battles. 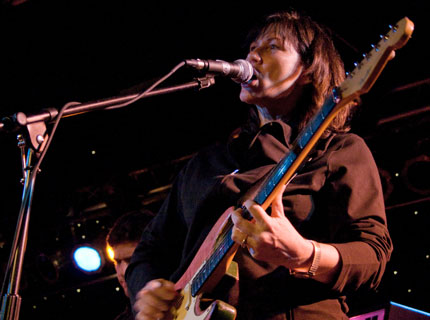 “Man, you guys come out no matter what,” the Breeders’ Kelley Deal said Friday night (March 7) before a packed house of alt-rock fans who braved a record-setting blizzard to reach Buffalo’s Club Infinity for the band’s first U.S. stop in support of Mountain Battles. And for their courageous feat in the face of treacherous conditions, fans were met with what Kim and Kelley Deal insisted was a big experiment, and a set list that, in Kelley’s words, “got a little weird.” “That was the first time we played that live,” she explained after set opener “Night of Joy,” a groovy, down trot number bolstered by Kim’s soft whispers.

And the evening’s experimental feel only grew with each tune and ensuing onstage utterance: “We’re not sure how this is going to work,” Kelley added before segueing into “German Studies,” a leisurely tune sung entirely in German by her sister Kim. The laid-back pace didn’t last, however, when Kim dove into the opening chant of “Cannonball,” sparking off a string of classics including several songs from early albums Pod and Last Splash. But the encore returned Buffalo fans to the petri dish: “Did you guys like ‘Here No More’?” Kelley questioned of the new acoustic tune. “We’re not sure if we’re ever going to play that one live again.”

Despite the trial value of the Breeders’ gig, it was obvious to fans that Kim’s childlike coo was as innocent as ever before, and with the Deal sisters reunited, the tour kick-off was just as fresh as their first big break.

The Breeders / Photo by Christopher Caporlingua

The Breeders / Photo by Christopher Caporlingua

Evan Pierce
Tags: We Were There