That's not a misprint. In a week's time, the band will release Consolers of the Lonely in all formats. 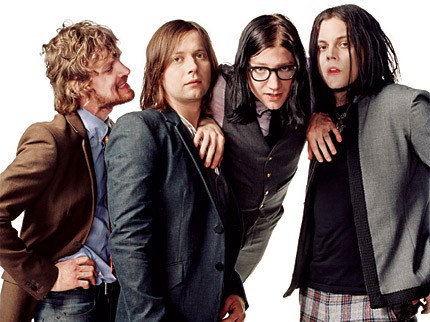 In order to release an album that will “not be defined by it’s [sic] first weeks [sic] sales, pre-release promotion, or by someone defining it FOR YOU before you get to hear it,” the Raconteurs have opted to release their just-completed album next week. In a press release signed by the band and just received by SPIN.com via email, the Raconteurs say that their second album, Consolers of the Lonely, will be available in digital, CD, and vinyl formats March 25, after being completed earlier this month. It’s an unprecedented move for a band releasing an album via a major label, in this case, Warner Brothers.

“The album was mastered and completed in the first week of March,” says the press release. “It was then taken immediately to a vinyl pressing plant. Then to a CD pressing plant. Then preparations to sell it digitally began. March 25th became the soonest date to have it available in EVERY FORMAT AT ONCE. The band have done no interviews or advertisements for this record before this announcement.”

The band will also sell a digital version of the album, which contains 14 tracks, via their own website in a high-quality, 320kbps version.

A video for lead single, “Salute Your Solution,” will also appear on March 25, if all editing goes well, the band’s release says.

“We hope not to confuse anyone with too many options, or deny them the formats that they like best,” the release continues. “The Raconteurs feel very strongly that music has worth and should be treated as such.Thank you to all those who respect music in this fashion, and thank you to our label partners for working with us to get this album to fans in as many formats as possible all at once.”