To commemorate the release of Bauhaus' first album of new material in 25 years, we rang up the biggest Bauhaus fan we know to write their Artist of the Day feature. 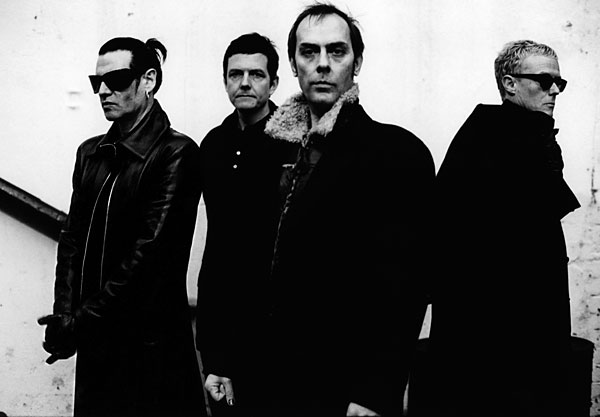 Who? Bauhaus is perhaps the most important goth band ever, and today will release what might be their final album. Everyone from Nine Inch Nails and Marilyn Manson to Interpol and My Chemical Romance to the goth kids from South Park and the girl wearing black nail polish working the register at your local Hot Topic owes much of their aesthetic to these four guys, now mostly in their early-50s.

Drawing heavily from David Bowie and Iggy Pop, Bauhaus formed in 1979 when brothers David J and Kevin Haskins and their childhood friend, Daniel Ash, teamed up with manorexic dancer Peter Murphy. They churned out an album every year until 1983 but had just limited commercial success in their native U.K. and almost no recognition in the U.S.

After their breakup, J, Haskins, and Ash formed Love and Rockets, scoring a hit with “So Alive” in 1989. Murphy continued a solo career — occasionally collaborating here and there with his former band mates — but with a sound that was increasingly Middle Eastern, due in no small part to his move to Turkey and conversion to Islam several years ago. Meanwhile, the cult of Bauhaus continued to grow on both sides of the Atlantic, culminating with a reunion tour in 1998.

The band reunited again in 2005, with a much-touted Coachella appearance and tour. Unfortunately, you won’t see them again as a band any time soon: Sessions for this new album were apparently contentious, one factor reportedly making this album their last.

What’s the Deal? After a quarter of a century since their last album of new material, the gothfathers have finally put out an album of ten brand-new songs, Go Away White, recorded over the course of two-and-a-half weeks in 2006. However, those expecting something like long-lost 1983 recordings unearthed from some secret crypt will howl with woe in their bat-infested caves: The band has gone through an entire lifetime since their break-up 25 years ago, and it’s reflected in every song the new record.

Of course, you’ll hear the sounds that made Bauhaus so much loved by generations of artsy outcasts and theater geeks: Daniel Ash’s infinite sustains complimenting David J’s reggae-inspired bass, and multiple tracks of Peter Murphy’s unparalleled voice, which ranges from the height of his notoriously razor sharp cheekbones down to the depths of the underworld.

At the same time, the album is an aural photograph of where they are now in life and in music. You’ll also get a healthy dose of Love and Rockets and the Peter Murphy solo work that makes him sound like the coolest muezzin in the world. Case in point: “Black Stone Heart” is more like Murphy singing as he did in the short-lived band Dali’s Car with Tones On Tail (the precursor of L&R) for the first three minutes, only to switch it up and return to 2008.

Still, Bauhaus throw raw, bloody meat to their die-hard fans with the riveting “Endless Summer of the Damned,” a track which should be played loudly and repeatedly until your neighbors complain to the cops.

Fun Fact: Peter Murphy was better-known in Britain for being the guy in the famous “Blown Away” Maxell ad. Seriously! See below:

In 2003, Lawrence Lewitinn attempted to become the first Bauhaus fan ever elected to the New Jersey state legislature. He occasionally contributes to PopSerious.com.

Are you an artist’s biggest fan? Would you want to write about them on SPIN.com? When it’s a momentous day in your favorite artist’s career, send us a pitch at community [at] spin.com, and tell us why we should feature that artist and what you’d say about them.