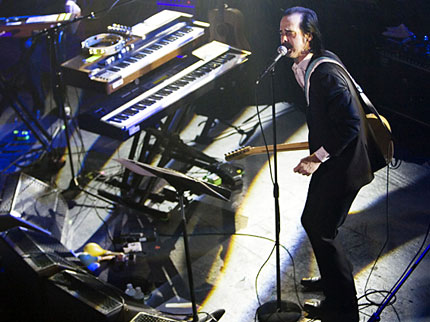 Drainpipe-denim-sporting rock fans flocked en masse to the dusty reaches of one of Manhattan’s last standing factory-villes last night (March 6) for the 2008 PLUG Independent Music Awards ceremony, held at West Side venue Terminal 5. But despite the promising bill — Nick Cave and the Bad Seeds, St. Vincent, Dizzee Rascal, the Forms, and Jose Gonzalez, among others — attendees were met with a humdrum indie rock rendition of American Bandstand. And comedian/host Patton Oswalt ain’t no Dick Clark neither!

Interspersed by Oswalt’s rare zinger and ineptitude at filling awkward logistical missteps with humor (many!), the event’s live aspect teased fans of the real crowd-drawing acts; St. Vincent, Dizzee Rascal, the Forms, and Jose Gonzalez were all limited to two-song performances while Nick Cave, the winner of the PLUG Impact Award, dragged the audience through a lengthy, painfully loud set, which dented the crowd and incited a frenzy for cabs out front. And the award winners — though quite deserving — were a no-brainer; Justice snagged the New Artist of the Year statue, Battles’ “Atlas” was awarded as Best Music Video of the Year, Animal Collective’s Strawberry Jam took the Indie Rock Album of the Year category, St. Vincent was honored for Female Artist of the Year, and — shocker! — Arcade Fire’s Neon Bible won the Album of the Year award. Not a single upset, shucks!

However, throughout the evening on the venue’s third floor VIP area, the indie rock elite merrily held court despite the crapshoot unfolding below; Secret Machines’ Josh Garza and Brandon Curtis dressed quintessentially Gotham, sipping their highballs while comedians Zach Galifianakis and Janeane Garofalo chatted over beers and Ivy League-educated drummer Chris Tomson of Spin cover boys Vampire Weekend, rocked a thick novel in his back pocket and smiled ear-to-ear endlessly.

When all was said and done, the predictable and tiring proceedings of this indie rock bore were quite overbearing, and I was exhausted. No bother, I’ll just jump the L train back to Williamsburg.

Nick Cave and the Badseeds / Photo by Jackie Roman

William Goodman
Tags: plug awards, We Were There