The next future-pop princess. BONUS VIDEO: Watch her rock the mic in Philly. 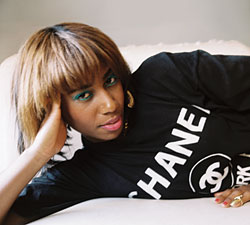 Even though singer Santi White mocks New York City scenesters on her single “L.E.S. Artistes,” she’s the first to admit that she could easily be mistaken for one. Today, for instance, the stylish 32-year-old Brooklynite, who performs as Santogold, is sporting a jaunty fedora and recovering from an all-night party with her producers, indie dance titans Diplo and Spank Rock.

But would any Lower East Side “artiste” agree to pen songs for lip-synching teenyboppers? “If it were up to me, that music wouldn’t even exist, but there is value in knowing how to write a fucking banger chorus,” explains White, who worked with Ashlee Simpson on Simpson’s forthcoming album. “What I took from doing it is knowing that I want my songs to be heard by the most people and liked by the most people.”

Good luck, given that commercial and creative success rarely dovetail. Her solution? Eclecticism to the extreme. “Even good bands are pushed to make albums that are the same throughout. I think everyone’s over it,” says the Philly native, who previously sang in punk act Stiffed, and before that worked as an A&R scout for Sony. If the first few tracks are any indication, Santogold’s selftitled debut album will indeed defy categorization: “L.E.S. Artistes” is shiver-inducing new wave, while the grime-y rhythm and shrill vocals on “Creator” recall M.I.A. (The two are friends and share producers Switch and Diplo.)

Based on the hype that has surrounded her fusion of rock, synth pop, and reggae ever since she opened for Björk in New York City last October, White has high hopes for her debut. “This is a really good time for music that’s exciting and doesn’t fit into anything,” she says. But even if the masses don’t pay attention, she’s sure to create a ripple. “I don’t put too much weight on [sales],” says White. “I just put it out and see what happens. It’s like, if there’s a pool and it’s kind of cold, I don’t walk in. I just scream and go.” PHOEBE REILLY

Santogold (Downtown) is out in April.

Phoebe Reilly
Tags: This Is Happening, who's next '08