The next folk-rock collective. BONUS VIDEO: An acoustic performance, just for SPIN.com. 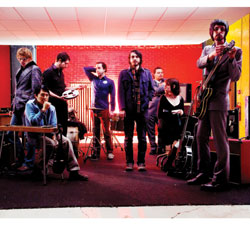 In a nutshell: Eight dreamy, world-weary Indianapolis musicians brought together by a shared love of woodsy Americana and chamber pop. Their cello-laden debut, 2006’s The Dust of Retreat, caught the attention of Epic Records; the band signed on without reservation. “I grew up playing music in basements, thinking it wasn’t cool to [sign with a major],” says frontman Richard Edwards, 24, who cofounded the group with Andy Fry, 32, whom he met in a pet store in 2004. “But you figure out that it isn’t about being cool or uncool. Plus, I just got a new amplifier for the first time since I was 15. It rules.”

What’s the big deal: An alterna-troubadour in the vein of Conor Oberst, Edwards has the kind of wounded-fella vibe that makes you want to take him home and pour him a mug of chamomile tea. While their first album was rich with whimsical storytelling and acoustic touches, guitarist Fry says the So and So’s are leaving the old “sex folk” behind in favor of “panic pop” on their upcoming disc, which they’re recording in Chicago and Indianapolis. “We’ve been trying to express a certain darkness we’ve been feeling,” he says. New tracks “Children’s Crusade on Acid” and “Hello Vagina” recast the band’s majestic pop as dark, crunchy, guitar-led marches that appear to be about the end of the world. Even so, the result will be more bookish than macho. “I guess it sounds manlier, but we’ll still probably get beaten up,” says Edwards.

Just for kicks: The 1997 mass suicide of the sneaker-clad Heaven’s Gate cult inspired portions of the upcoming record. “It’s symbolic of a lot of things we’ve been feeling,” says Fry. “Plus,” adds Edwards, “we want to try to score an endorsement deal with Nike. Think it’ll work?” Definitely.

Animal! (Epic) is due this summer.

Now Watch This:
Margot & the Nuclear So and So’s – “Flower Pot”

Kyle Anderson
Tags: This Is Happening, who's next '08