The next chanteuse. BONUS VIDEO: An exclusive backyard acoustic version of "Mercy." 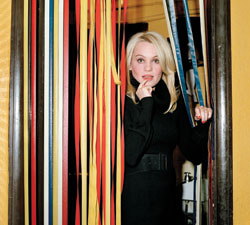 In a nutshell: Thrown out of her school choir at age eight for being too loud, Welsh native Aimee-Ann Duffy poured all her energy into a pink karaoke machine, a gift from Santa. On it she recorded countless original songs, sending CDs off to record companies. “That machine was my dear friend for about six years,” the singer says over a latte in a London café. Fast-forward a decade or so: In 2004 some of Duffy’s demos reached famed British indie label Rough Trade, which signed her to a management deal. With former Suede guitarist turned producer Bernard Butler guiding her, Duffy, now 23, landed in the U.K. papers and late-night talk shows on the promise of a single song, “Rockferry,” a slow panning slice of soul that she wrote in under an hour.

What’s the big deal: Duffy may have her roots in one of the most bucolic corners of Great Britain, but her understated style channels the sound of far-off Memphis and Detroit. “I don’t try to understand it,” she says, noting that her parents didn’t even own old Stax or Atlantic sides. “I guess I’m an absolute freak!” There is something odd, indeed, about this petite, fair-skinned girl’s voice: a smoky, big-lunged, wee-hours shiver that might get Ahmet Ertegun finger-snapping in his grave. Think Dusty Springfield, right down to the peroxided hair and ink-black mascara. Think Amy Winehouse, but with sweet, Motowny vibes instead of a hip-hop attitude and foul mouth.

Don’t look back: “What’s going on?” Duffy asks rhetorically, referencing the fact that she, Winehouse, London’s Adele, and Liverpool’s Candie Payne are all doing retro soul. “The weird thing is, my demos had existed for three years, then loads of [similarly inclined artists] have come to the surface. There must be something in the air.” C.M.

Rockferry (Mercury) is out in April.

Craig Mclean
Tags: This Is Happening, who's next '08