The next retro-pop preppies. 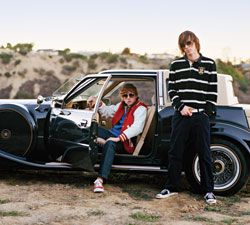 It doesn’t sound very cool, but D.A. Wallach and Maxwell Drummey, the Harvard alums who make up harmony-loving pop duo Chester French, owe their success to solid study habits. “We got deep into the canon of classic rock in the summer between our freshman and sophomore years,” says Wallach, 22, whose ghostly pallor, goofy grin, and scarlet hair make him resemble a modern-day Archie. “Listening really closely to the Beatles and Bowie helped us learn the basics of songwriting.” The homework paid off. A demo the band recorded at school found its way to Don C., Kanye West’s comanager. Days later, a record deal was on the table. Competing offers quickly followed from Jermaine Dupri and Pharrell Williams. Were these British Invasion obsessives surprised to find themselves being courted by some of hip-hop’s biggest names? “We might not have much in common with them on the surface,” says Wallach, whose fashion sense is more L.L. Bean than Sean John, “but we all believe that good music is good music. It’s not as if Kanye and Pharrell are only listening to rap.”

Encouraged by Pharrell’s promise not to meddle, the duo — named for the sculptor who carved the statue at the Lincoln Memorial — decided to sign with his Star Trak imprint. “He just wanted us to do our thing,” says Wallach. “He wasn’t imposing his ideas or telling us to go out and get a stylist.” Pharrell knew to leave well enough alone: With its watery keyboards, minorkey melody, and poor-little-rich-girl lyrics, the band’s “She Loves Everybody” brings the smoky pop genius of the Zombies oohing and aahing back to life. Likewise, “People” and “The Jimmy Choos” — rife with chugging guitars, wafting vocals, and oddball sound effects — could be lost singles dug up from Brian Wilson’s sandbox. “We knew we weren’t going to do better than the Beatles,” says Wallach. “But Max and I tried hard to make a great album.” Is that humility? Apparently, Chester French still have a thing or two to learn about rock’n’roll. D.M.

Love the Future (Star Trak/Interscope) is out this spring.

David Marchese
Tags: This Is Happening, who's next '08