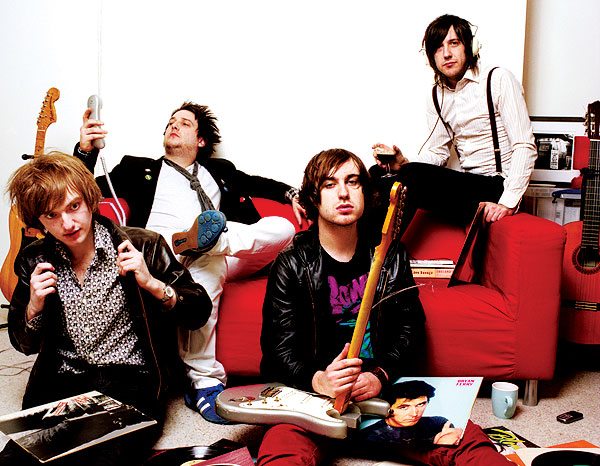 Custom guitars are generally known as the twin-necked, coffin-shaped preserve of famous fret-wankers, not preschool kids from English seaside towns. But not many children were raised like Switches’ frontman, self-described “boy with social problems” Matt Bishop. He would point to a guitar on a T-Rex album cover and have it crafted for him by the end of the week, thanks to his dad, a music-obsessed handyman who made prop instruments for the weekly U.K. TV show Top of the Pops.

“I was interested in multitracking as a four-year-old,” Bishop says from behind a floppy fringe in a North London pub. “I used to get two old Fisher-Price tape recorders and bounce between them, amazed at how my voice sounded doubled up.” He was a full-fledged troubadour by five, writing his first song by six. “It was based on one chord,” he recalls, “and it was rubbish.” It wasn’t until a decade later that a band materialized.

That first group, Matt Rock and the Others (“a shambolic three-piece obsessed with Jon Spencer”), won a battle of the bands and the chance to open for arch-rockers the Darkness in 2003. Now the Darkness have faded to black, and Switches-whose members also include Ollie Thomas (guitar, vocals), Thom Kirkpatrick (bass), and SteveGodfrey (drums)-have a debut album on Interscope, a gig at 2007’s Glastonbury festival, and a U.S. tour with Scot rockers the Fratellis under their studded belts.

How to explain the swift rise? “It’s our melodic, sexy rock,” says Bishop, severely underselling the hook-laden pleasures of their debut, Lay Down the Law, whichranges from Franz Ferdinand–style swagger (“Lay Down the Law”) to raucous glam (“Drama Queen”) to steroidloaded power pop (“Coming Down”). Lyrically, the songsjump from sex to boy-girl trouble to even ickier boy-girl trouble: Take “Stepkids in Love.” “It’s very soap opera,” says Thomas.

Bishop defends the subject matter. “I don’t want to be Bono, shaking George Bush’s hand. I don’t want to be Morrissey, making comments about the state of England,” he says. “I just want to make good music. I’d like to be someone like Damon Albarn.” Ah, still one precocious fella.

Tim Chester
Tags: This Is Happening