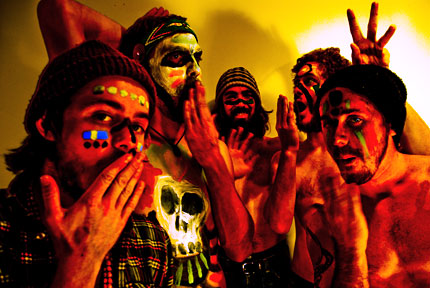 Who? State Bird’s core consists of Coby Hartzler (vocals/accordion/ Wurlitzer) and Jared Riblet (guitar/vocals), both hailing from Dover, OH. On their debut album, 2006’s Marching in the Wilderness, the duo worked with an eclectic collection of like-minded artists and singers, formulating a curious variety of ethnic folk. And State Bird’s forthcoming sophomore set, Mostly Ghostly, embodies a similar collaborative vibe and sonic product, and will drop Feb. 26 via Kansas City-based imprint, Record Machine.

What’s the Deal? Mostly Ghostly presents glorious, full-bodied tracks that swell with a plethora of instrumentation and gospel-like choruses. The eye-opening “I Saw the Light” layers clipped vocals over accordion, a brass section, and hedonistic blasts of melodic whoops and shrieks. State Bird — also including Caleb Winn (bass), Matt Garver (percussion/brass), and Nathan Quinn (drums) — give more than a brief nod to Beirut’s orchestral renderings, but refrain from Zach Condon’s heavy melancholic edge. The boys maintain a quick pace and vocal freedom with “The Golden Glowing Mask” while channeling Sufjan Stevens’ jagged indie quirkiness. Similarly, “A Voice As Old As Fire” plays with cheerfully erratic percussion and braying trumpets. The swinging vocals swoop around the wildly organic instrumentation, yet, despite all the musical passion, State Bird sonically satiate without over-stuffing.

Fun Fact: Though State Bird emit a laid-back hippy vibe, they’ve had some unfortunate experiences. “We have been robbed at gun point. Our van was broken into,” Hartzler tells SPIN.com. “We saw a guy get stabbed in the stomach, and somebody shot the windows out of the gas station while we were filling up with gas,” He muses. “We are due for some good luck.”

On the Web:
State Bird at MySpace