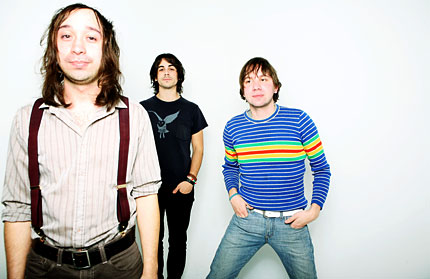 Who? Longtime friends Daniel Murphy (vocals/guitar), Nicholas Cirillo (bass/vocals) and Jon Molina (drums) formed Right On Dynamite in late 2005 after playing in two previous bands with different lead singers. Their first seven-inch single — produced by Matt Thornley (LCD Soundsystem) — featuring “Won’t Let It Go” and the “Wrong, Too Right” B-side was released on Standpipe Records a few months ago. The band is finishing a three-day residency at Piano’s in New York City this month and then moving on to perform at SXSW in March.

What’s the Deal? The guitar introduction to “Won’t Let It Go” will have you thinking that Right On Dynamite is reigniting the Strokes’ Room on Fire, but it lasts only three seconds and precedes some youthful American earnestness. “It’s hard enough to never let you down,” Murphy begins over a steady bass line and choked guitar strumming. He cites some “early ’60s English rock” as a main influence, and the buoyant melodies on the tracks recorded so far reflect that. Lyrically, he looks back with regret and forward with hope without funneling cloying sentiments down the listener’s ears. And the heart on Murphy’s sleeve is always more important than the sleeve itself — the band gets by more on raw emotion than style and flair, while also bringing the fun for all ages. You don’t have to worry about that Casablancas guy singing, “We could go and get 40s / Fuck goin’ to that party” in front of Mom.

Fun Fact: Guitarist Daniel Murphy’s aunt’s brother is legendary Marvel Comics artist John Romita, who is best known for designing art for The Amazing Spider-Man. In fact, Danny has an original Spider-Man drawing that Romita made for him when he was born. ALEX DIMITROPOULOS

On the Web:
Right On Dynamite at MySpace