Paramore Is a Band

She's the flame-haired frontwoman for rock's most successful new act. But Hayley Williams just wants to be one of the guys. 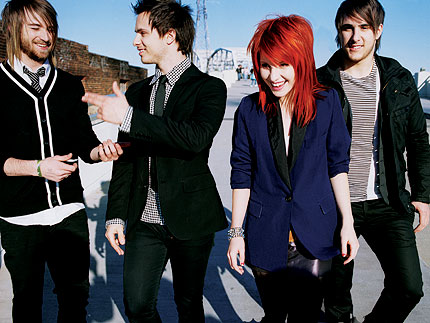 Franklin, Tennessee — 30 minutes south of Nashville ? is one of the wealthiest towns in one of the nation’s wealthiest counties. Brad Paisley, Carrie Underwood, Miley Cyrus, and Sheryl Crow live around here. So does half of the contemporary Christian-music industry. It only follows, then, that the Starbucks on Main Street is a haven for power meetings, and right now, the brain trust behind local-kids-done-good Paramore face a minor crisis as they discuss new merch with their manager. Josh Farro, the pop-punk quartet’s 20-year-old guitarist, wears a look of concern and resignation.

“I asked for it extra hot,” he says, shrugging apologetically as he hands a soy-six-pump-extra-hot-no-water chai to 19-yearold flame-haired singer Hayley Williams. “But it’s still hardly hot at all.” Williams gamely accepts the tea. Crisis averted.

Paramore earned a gold record for their second album, Riot!, in November, and a Best New Artist Grammy nomination in December (although every third caffeine fiend in the place might have a gold record over his or her mantel at home). Williams and Farro are inspecting a white-and-orange-striped scarf that will be sold on an upcoming tour. It’s a little wide, Williams figures, draping it around her diminutive frame, and it might look better if the orange was as bright on both sides. The text on the tag might be placed wrong, too.

“But I’m nitpicking,” she says, smiling sweetly. “If it looks like we have some crazy designer thing and we’re some little band, that wouldn’t look right, would it?”

Now Watch This: Behind the scenes of Paramore’s Nashville cover shoot

She says this earnestly, but Paramore haven’t really been a little band for some time. They were little, in a few senses, for a year or so after the release of their 2005 debut, All We Know Is Falling (on emo powerhouse Fueled by Ramen), while then-16-year-old Williams’ dad was piloting the band’s tour van and she and then-15-year-old drummer Zac Farro were scribbling homework before soundcheck. They’ve since sold 178,000 copies of Falling, and by the time the fiercely insistent chorus of sweet-revenge anthem “Misery Business” (from Riot!) hit TRL, bigness was looming. Six hundred and fifty thousand copies of Riot! later, the band rang in 2008 on MTV, shivering with VJ Damien Fahey as the Times Square ball dropped on Tila Tequila’s New Year’s Eve Masquerade.

Back at home in early January — their nearly monthlong break around the holidays being the longest they’ve had in years — things don’t seem all that big or all that different. Josh packs Williams and her lukewarm tea into his 1995 Toyota Camry four-door sedan, and they roll past the 70-year-old Franklin Cinema and out of Franklin’s 15-block, Old South-charming downtown into the sprawl of manicured upper-middle-class suburbs.

On these rare occasions when they’re home, the members of Paramore congregate in the converted attic at friend Ajax’s parents’ place. They play video games, watch movies, and tussle with Ajax’s boxer, Roxy. Ajax, a genial jeans-and-T-shirt guy in a black beanie, is as regular-kid as they come; without the magazine-ready haircuts and musical ability, his four friends would probably come off the same way.

“Hayley and I were talking last night,” says Josh, perching on Ajax’s couch, as Zac, 17, pulls up a chair. “We were in my car, and ‘Misery Business’ came on the radio. It doesn’t feel like it’s us. It’s like, wow….” Williams nods slowly in agreement.

Although the quartet have spent enough time on tour in the past three years for their Bible Belt upbringing to lapse, those values remain evident. Swearing is uncommon, hugs are plentiful; if there’s an addiction afoot, it’s to Sonic milk shakes. But wholesome as Paramore’s four devoutly Christian members might be, they understood early on that they still weren’t wholesome enough to stick to the Christian-rock market so omnipresent in their hometown. (Although they did do early gigs at Christian-rock fests like Cornerstone and Purple Door.)

“When you do Christian music, you get put on this pedestal,” Josh says. “And if you do anything wrong — like dye your hair the wrong color — it’s a sin.”

Williams, whose firecracker follicles have presumably sealed her own damnation, interjects, “What would we have done when we wrote ‘Misery Business’?” A song about stealing back a stolen boyfriend that uses the word whore certainly wouldn’t slip unnoticed onto Christian radio. (Rumors have persisted that the boyfriend in question is guitarist Farro, yet he and Williams publicly insist they’ve never dated.) “Writing that definitely helped me and the guys through a really difficult issue, and something that you could say kind of controlled my spirit.”

The band they are right now, Fueled by Ramen president John Janick figures, could be about to change profoundly. Janick’s tended over Paramore since their baby-faced beginnings, along with other FBR bands such as Fall Out Boy and Panic at the Disco as they followed similar (if sharper) arcs. He’s not expecting Paramore to stay less famous than his flagship bands much longer, and their status as early adopters of the so-called all-encompassing “360 deal” may provide the longevity that has eluded many of their emo peers. “When I gave them their gold record, it was really an emotional thing,” Janick says, “because I feel almost like they’re family, and seeing them get that — I felt like it was gonna start the chain reaction. They’re set up well to take what’s going to be coming at them, and I believe they’re gonna be around a long time.”

Back home in Franklin, Paramore get hints — like the Hot Topic clerk who blasts Riot! as bassist Jeremy Davis, the band’s grizzled elder at 22, shops. “Everybody says it’s gonna get worse,” Zac says, shrugging. “But it’s not as bad as everybody says — ‘Oh, y’all probably get mauled at the mall, don’tcha?’ “

That kind of stuff does happen in the U.K., though, and it largely happens to Williams. The three guys can walk down London streets unbothered, Josh says, smirking at Williams. “For her, it’s like, ‘Hayley Williams, come here!’ ” he mock squeals.

They admit to frustration with how the British press singles Williams out, putting her on magazine covers alone. She frets that her bandmates don’t get the recognition they deserve, and in hopes of combating this, hits U.K. stages in a T-shirt scrawled with PARAMORE IS A BAND, perhaps a nod to the BLONDIE IS A GROUP buttons of almost 30 years ago. She feels less singled out in the States, and it’s a relief.

“I think it’s because we’ve tried to be really smart about marketing our image,” she says. “We’re just breaking into this mainstream world, and people are hearing about us for the first time. And we don’t want their first look at Paramore to be me by myself — even if it says ‘Hayley of Paramore,’ it’s that face, they’re gonna see that. Until we feel comfortable and feel like the world knows who Paramore is as a whole, then we’re gonna keep fighting to show people our whole band.”

“We know exactly what we want, all the time,” Josh says. “We’re not gonna let anybody come in and tell us what to do, because it’s not their band.”

What Williams wants now, though, is a ride back to the apartment she shares with best friend Bekah, since she’ll be up at 7 A.M., learning to shoot guns. She got a gift certificate for lessons from her grandmother, and the lessons, she figures, definitely threaten to be interesting, if ethically challenging. “I’m not sure how I feel politically,” she says. You start to worry about all your choices, maybe, when hundreds of thousands of teens anoint you a hero via MySpace and LiveJournal posts. Role model isn’t a job she signed up for, and the prospect scares her, even if her three bandmates agree she makes a great one.

“It’s gonna happen, no matter what,” Williams says, somewhat timidly. “But I still think it’s cool that, I don’t know, a 30-minute break between Tila Tequila and The Real World can be something we were a part of. And it’s real — it’s not scripted, or topless, or shimmying like a pole dancer.”