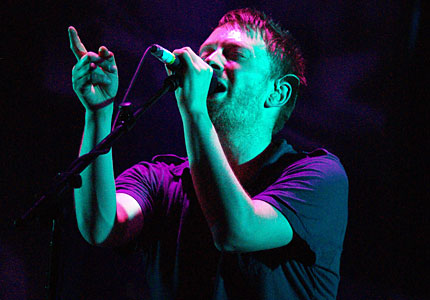 Just when you figured the Oxford-based brainiacs were opting out of the stateside summer festival circuit for a full outing all their own, Radiohead have been announced as the headliner of New Jersey’s newly minted festival, All Points West — but not just one night, two! That’s right, Thom Yorke and the boys will run through their latest, industry-boggling set In Rainbows and more the first two nights of the festival, brought to you buy Coachella promoters AEG Live and Goldenvoice, and slated for Aug. 8-10 at Liberty State Park in Jersey City, NJ. Check back with SPIN.com, for more U.S. dates are expected for late summer and fall. [Via Pitchfork]

Read more news on Arctic Monkeys and No Age after the jump.

Rambunctious Los Angeles-based rockers No Age have unveiled additional details, including a tracklisting, for their forthcoming Sub Pop debut Nouns. As the follow up to 2007’s Weirdo Rippers, the fresh 12-track set is slated to drop May 6 and was recorded at L.A.’s Infrasonic studio this past fall with Pete Lyman (Matt and Kim, Mars Volta). And for the visually dependent listener, No Age’s Nouns will serve up a 68-page full-color booklet with each album copy featuring photos and art pieces. [Via Pitchfork]