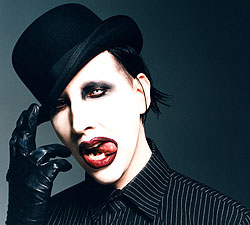 As Spin scribe Jonathan Ames experienced first hand, shock rocker Marilyn Manson’s penchant for the green fairy, a.k.a. absinthe, drove him to formulate his own brand of the liquor: Mansinthe. And though the mildly hallucinogenic drink is illegal in the U.S. — Mansinthe is produced in Switzerland — Manson’s product was tested by respected food blog Epicurious.com to very unsavory results. One tester described Mansinthe as tasting like sewage water or swamp mud, while another said the drink “smells too strong [like] rubbing alcohol.” Another had an even worse experience: “Holy shit… is this poison?” [Via NME.com]

After weeks of fine tuning material in their hometown of Sussex, England, piano-driven rockers Keane have settled into a Parisian studio to record their yet untitled follow up to 2006’s sophomore set Under the Iron Sea, alongside seasoned producer Jon Brion (Kanye West, Elliott Smith, Spoon). “All sounding energized, weird, new and exciting,” pianist Tim Rice-Oxley wrote of the band’s new tunes on his keanemusic.com blog. “Can’t sleep — brain racing with thoughts about synthesizer parts and drum fills… Jon Brion arrived yesterday to contribute his worldwind of crazy ideas, pushing us even further out of our comfort zone than we’ve already pushed ourselves.” [Via NME.com]

It seems Brit musicians have some innate affinity for banding together in the proverbial supergroup — just ask any one of these rockers. And now, members of Arctic Monkeys, Mystery Jets, Supergrass, and Reverend and the Makers have joined forces for a greater cause: charity. The group will write and record tunes for Bottletop, an organization aiding street kids in deprived areas, including Brazil, India, and Malawi. Reverend and the Makers frontman John McClure explained to XFM radio: “I’ve only just started recruiting but so far I’ve got Danny Goffey [Supergrass], some lads from Arctic Monkeys and the Mystery Jets’ drummer [Kapil Trivedi] and their bassist [Kai Fish]… We’re gonna record tracks here in London then take it over to Brazil… A supergroup of Brazilians will put vocals onto our tracks and then our British artists will do the same to their tracks.” [Via Drownedinsound.com]