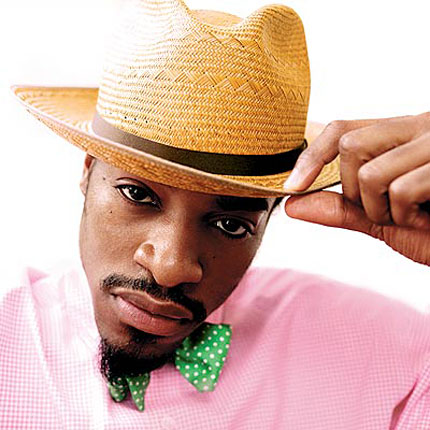 In what’s likely his most innate, apt venture yet, flamboyant Outkast co-principal André 3000 has unveiled a clothing line entitled Benjamin Bixby. According to New Yorkmagazine, the clothing line, which will draw from Andre’s “rebelgentleman” style, will tentatively arrive in Barneys this fall.Furthermore, the line and its namesake character is “kind of like youruncle, or your granddad, and he has a closet full of experiences andclothes, and he’s been around the world.” Speaking of around the world,the report claims André, who designed and funds the entire venture,studied up by visiting “Italian factories and Parisian textile fairs.”[Via Pitchfork]

Sure, rumors continue to circulate, but it appears the truth on everything from rapper Eminem’s on-again-off-again wife Kim to daughter Hailie, from his health to rise to fame will drop Oct. 16 with memoir Eminem: The Way I Am. Thanks to publisher Orion Books, with The Way I Amfans can snatch up unseen photographs, journal notes, hand-drawn artand lyric sketches, and a narrative and introduction written by Eminemhimself. “Because of where he is from, people think they know where heis at, what kind of person he really is,” said a statement. “This bookcuts through all that and gets to the source.” [Via NME.com]

In yet another fitting partnership, former drummer Marky Ramone has added to the already vast catalog of Ramones memorabiliawith none other than a line of condoms. Yes indeed, to celebrate lastweek’s annual National Condom Week, the sticksman joined forces withsafe sex education company Ready Two Go for a collection of “safer sex kits”– a Ramones tin packaged with two condoms, lube, and an STD resourcecard, arriving with the slogan “Too Tuff to Break” and surely easingyour worries. And when empty — wink, wink — instructions suggestfilling your tin with the likes of “coins, pills, cigarettes, stash,mints, gum.” Also, every 1,000th tin arrives with an autographed pairof Marky Ramone drumsticks. Hooray! [Via Pitchfork]

After sessions in Morocco and France with producers and oft-collaborators Daniel Lanois and Brian Eno, U2 have returned to their native Ireland and holed up in a Dublin studio to continue working on the follow up to 2004’s How to Dismantle an Atomic Bomb. And so far, Lanois tells Billboard.com,the results are promising: “The sleeves are rolled up. Bono is allcharged up with a lyrical angle… We’re going to try and break new sonicground and deliver a masterpiece.” Please do.