Winehouse to pen Bond song? Brooklyn's Pool Parties to return in '08, and Arctic Monkeys' Turner and the Rascals' Kane's project to sound like the "'60s." 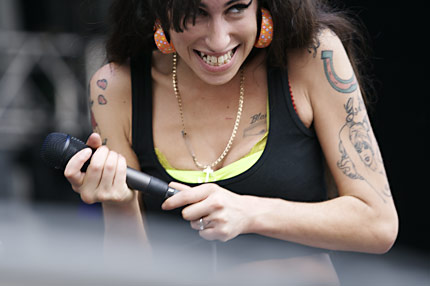 Rumors regarding Amy Winehouse’s involvement in the forthcoming James Bond film rage on. But now, instead of, um, pointing to Winehouse as the next Bond Girl, sources claim the Brit songbird is set for a much more apt role: singer and songwriter of the film’s theme song. There’s just one catch: the notoriously drug-addled, crack pipe smokin’ singer must be clean by April. “That’s when the Bond people make a final decision on who sings the theme,” an unidentified source told U.K. rag The Sun. “If Amy is clean then, it’s hers.” [Via NME.com]

Just as Brooklynites were mourning the loss of their beloved Pool Parties, and cautiously pondering the return of the world’s biggest melting pot of piss, water, and chloride, officials for McCarren Park have announced the return of the weekly Sunday fiestas in the summer of ’08! That’s right, though a lineup has yet-to-be announced, the pool will remain empty — of water that is — and hipsters across New York City can once again waste away in the sun, playing dodge ball, frolicking on the slip and slide, and drinking themselves into a sweltering stupor amidst a bill of bands that — at least in years past — has surpassed our wildest expectations. Double yay! [Via Brooklynvegan.com]

When Brit sensations Alex Turner of the Arctic Monkeys, and Miles Kane of the Rascals joined forces for an unnamed project and retreated to France this past summer to record a currently untitled debut LP, fans could only imagine the brash, snappy, post-punk product. But now, as detailed by Simian Mobile Disco constituent and producer James Ford (Klaxons, Arctic Monkeys, Mystery Jets), the record will offer something else altogether. “It’s quite different sounding than the Arctics I think,” he told BBC 6Music. “It’s kind of ‘Sixties-y’ and there’s a lot of orchestration and stuff.” The orchestration we knew, but what’s this “stuff” you speak of, Mr. Ford?[Via NME.com]