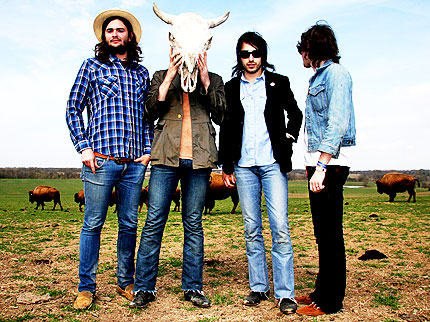 What’s the Deal? Hymns fortify their Southern moonshine with a more roughshod, electric sound, distilling a party album for the roots-rock set.Giving a nod to the Band, they pepper the record with harmonies and punchy horns, most effectively on “I Can’t Be What U Want,” which bounces and grooves along over a hypnotic banjo riff. Much of the album is rooted firmly with a sense of place, from “NYC Nervous Breakdown” to “L.A., or Babette Sange,” a saloon jam that debunks the siren song of Los Angeles: “Come on through / You’ve got nothing to lose / except some dignity and pride,” sings frontman Brian Harding.

Who? In 2005, Jason Roberts left his gig as Ben Kweller’s guitarist to join Hymns, a band fronted by Harding, his childhood friend from North Carolina. They released their debut, Brother/Sister, in the fall of 2006, and proceeded to hit the road with the the Lemonheads, Sam Roberts Band, and Ben Kweller, pairing up with Texas natives Tony Kent (drums) and Matt Shaw (bass) along the way. In two weeks, they’ll release their second LP, Travel in Herds.

Fun Fact: Hymns recorded Travel in Herds on a 65-acre ranch in Texas and slept in teepees at night during the sessions.

Now Hear This:
Hymns, “I Can’t Be What You Want” DOWNLOAD MP3

On the Web:
Hymns at MySpace