The Gutter Twins: Up From the Gutter

With 40-odd years in rock between them, the Gutter Twins' Greg Dulli and Mark Lanegan have two lifetimes' worth of war stories. But rather than rehash their checkered pasts, they'd prefer to let the music do the growling. 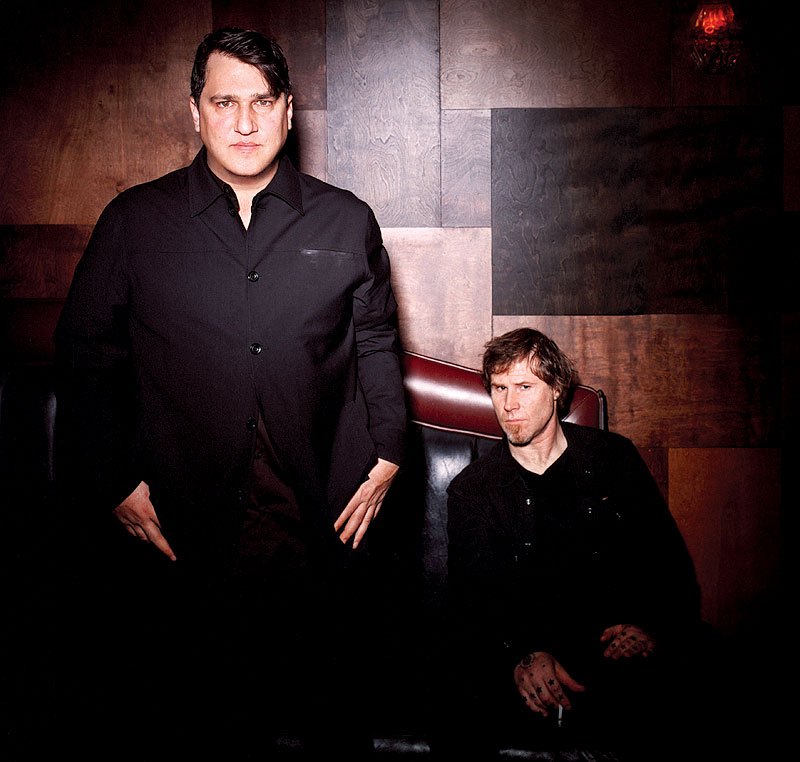 When we went into the studio, we had nothing,” says Greg Dulli, 42, the formerAfghan Whigs and current Twilight Singers frontman, from a corner booth at Footsie’s,one of two Los Angeles bars he owns. Dulli is talking about Saturnalia, the haunting new goth-blues album he made with Mark Lanegan, 43, late of Screaming Trees, under the appropriately seedy nom de rock the Gutter Twins. And though he means that the two men hadn’t written any songs before they started work on the record in 2003, they hardly went into the studio with nothing: Over the two decades since they were at the forefront of the tumultuous alt-rock feeding frenzy, the grunge-era survivors have traveled parallel paths through major-label near-stardom, postbreakup tussles with drug addiction, and subsequent reinvention as respected, battlescarred career artists. Now that their paths have intersected, however — Lanegan was also a touring member of the Twilight Singers in 2006 — they aren’t interested in reliving the bad old days, and if they’ve cleaned up their acts, they certainly haven’t mellowed. “I’ve had some clowns ask me questions and they get stonewalled says Dulli, nursing a Pacifico. “If it’s shock-value exploitive shit you’re after, go fuck yourself.”

SPIN: When did you guys actually meet?
DULLI: [To Lanegan] I met you in ’89 at a party in Seattle. But it was just sort of a “Hi, how are you?” I had seen his band play a couple times.
LANEGAN: We’d actually played together.
DULLI: We had?
LANEGAN: In Boston.
DULLI: That’s right — with Primus.

SPIN: That’s a weird bill. The Whigs and the Trees sharing a stage makes sense, though; both your bands deviated from the grunge template in interesting ways.
DULLI: I think that’s probably what helped us be friends in the first place — there was a common thread. And we both did a similar kind of get-in-the-van-with-your-guys thing — you were your own roadie and tour manager. We also both went from independent labels to major labels and then back again. Our career trajectories are eerily similar. We’ve compared notes: “Did you do this? Did you play here? Did you meet her?”
LANEGAN: Yes, yes, and yes.

SPIN: But you were part of a cultural moment bigger than yourselves.
DULLI: It was a cultural moment, but there were stars shooting higher in that galaxy. And because we were able to forge through it, we had nothing to live down later.

SPIN: Do you feel fortunate in retrospect to not have been in, say, Nirvana?
LANEGAN: Yeah. Having seen it happen to those guys, I definitely think it makes it a lot harder to make music, for some reason.
DULLI: Nothing against either of our first groups, but I like what he does better now, and I like what I do better now. I feel like I spent all that time learning. It was an apprenticeship, a really long one. Whereas some of those guys, like Kurt [Cobain], caught lightning in a bottle.

SPIN: That said, you’re still referred to as “former Afghan Whigs frontman and “former Screaming Trees frontman.” Is that a drag?
DULLI: No, because it makes people come to your concert and find out what you’re doing now. All you want to do as a musician is have people have an experience with you. I’ll be “former Ross Rams shooting guard,” you know? I was that, too.
LANEGAN: “Former Texaco employee.”
DULLI: “Former IGA stockboy.”

SPIN: Does it make it hard to keep the focus on your current work when people like me are always asking you to look back on your past?
DULLI: I did what I did, now I do what I do — that’s the way I look at it. I can’t take back what happened, but I can have something to do with what happens next.
LANEGAN: I prefer to try to stay in the here and now — it’s a lot healthier.

SPIN: The Gutter Twins are hitting the road this year. Is touring a different experience for you guys now than it was when you were in your 20s?
DULLI: When Mark was in the Twilight Singers, we were hands down the oldest guys. After the show, the band and the crew would go out, but we’d go read or watch movies on the bus. I remember after a show in Albuquerque, this white stretch limo pulls up alongside the bus and four hot chicks pop out. They had champagne and short skirts, and they wanna meet me and Mark. It looked kind of fun, but we couldn’t come out; I think we were watching a basketball game. So the limo pulls away with the rest of the band in it, and Mark turns to me and goes, “Wow, what happened to us?” That defines the two of us now.

SPIN: Are you cool with that?
DULLI: I got a vicarious thrill from the stories when they came back. “Did you do this? Did you do that?”
LANEGAN: Much like George Kennedy in Cool Hand Luke.
DULLI: Exactly. “Then what happened, kid?”

SPIN: Is that attitude a product of already having–
DULLI: Completely chewed the scenery? For me, yeah. I can’t do it anymore.

SPIN: Can’t or don’t want to?
DULLI: I probably could, gun to my head, and scare the shit out of everybody with my capacity for doing it. But I guess I just don’t want to.
LANEGAN: I enjoy touring more now.
DULLI: I do, too. Now it has a structure to it: You get on the bus, and the bus is your home and your coworkers are your family. I have three businesses, and I also like to travel not for work. But I always make time for it, and now I look forward to each day, whereas I used to be sleeping off a bender.

SPIN: Are other things in your lives as or more important than music?
LANEGAN: Basketball — that’s about it for me.
DULLI: Your relationship with your lady.
LANEGAN: Normal shit.
DULLI: I find I’m more three-dimensional than I used to be. When I was 25 years old, I was a one-dimensional–
LANEGAN: Knucklehead? That’s what I was.

Read our review of the Gutter Twins debut performance at NYC’s Bowery Ballroom, and listen to a backstage interview conducted that evening by SPIN.com’s Peter Gaston.