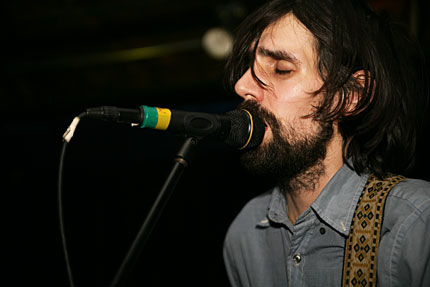 Launched by Steve Kille’s thumping bass on “What Needs Must Be,” the Dead Meadow surged forward with a propulsive, driving back beat and shuddering, acrobatic bass line, underscoring the echo-drenched guitar wrangling of vocalist/guitarist Jason Simon. It didn’t take long to figure out that this was a different beast than the airy, shimmering version on the album. This return-to-form of heavy, bluesy psychedelia was the theme of the evening, with the band offering the same treatment to much of their recent, lighter material, as well as cutting a wide swath through the heavy hitters from their catalog. Simon made effective and plentiful use of wah and reverb, creating dense layers of constantly shifting sound as he tore into epic passages of complete freak-out wizardry, Kille’s bass often providing contrapuntal tension as drummer Stephen McCarty’s charging rhythms anchored things. Offering a glimpse back to their beginnings, Dead Meadow closed their set with the conjoined-twin guitar and vocal stretch, “Beyond the Fields We Know.”

More band photos after the jump.

We asked: Stoner rockers Dead Meadow’s new LP, Old Growth, finds a more laid-back psych-pop approach. What other heavy rock act, active or defunct, would you like to see try a poppier, more laid back approach?

Nicholas Hall
Tags: We Were There