In the first Spinhouse Live on the road, Riggs' blazing southern-bred rock plows through a New England snowstorm at Puma's headquarters. 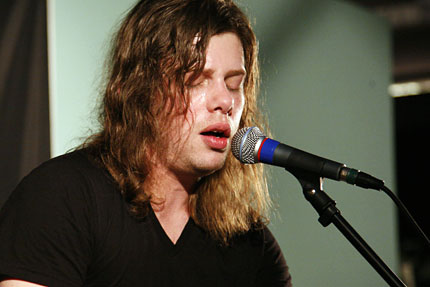 Born on the bayou, and honed in dark and smoky clubs the world across, Dax Riggs’ grave, southern-fried rock’n’roll found a new and slightly uncharacteristic venue yesterday (Feb. 26) in the modern offices of Puma’s North American headquarters for the first in the Spinhouse Live on the road series. As snow flurries dumped outside the suburban Boston offices, Riggs and multi-instrumentalist Andy Macleod hit a makeshift stage for a mid-afternoon set, and treated hundreds of thrilled employees to jangling acoustic and searing electric numbers — and were met with a rapturous response.

Riggs, also of Deadboy & Elephantmen fame, began the intimate gig by plucking out “Night Is the Notion,” drawing shocking expressions with his moving bellows, before Macleod switched from lead guitar to drums and the duo ripped out “Living is Suicide,” “Wall of Death,” and “Dog-headed Whore,” all off 2007’s LP We Sing of Only Blood or Love. Moving to the keys, Riggs then strolled through a handful of promising, unidentified tunes from his forthcoming, yet-to-be titled LP, as well as a touching, English language rendition of French songwriter Jacques Brel’s heart-aching standard, “Ne Me Quitte Pas.”

With the crowd now warmed up and the snow mounting outside, Riggs fell into stride and belted out a few more numbers, notably a searing, set-closing version of “Radiation Blues,” its saloon-rocking riffage and Riggs’ screeching epitaphs coalescing into an atypical yet warmly welcomed end to a what would have otherwise been yet another day at the office.

Later, outside preparing to hit road, I watched on as employee after employee walked past Riggs and thanked him for his performance. The crowd’s positive, across-the-board response was just another testament to Riggs’ style — it can’t be restrained, everyone has soft spot for dark and Voodoo-like rock’n’roll, not just Bourbon Street drunks and club lurkers.