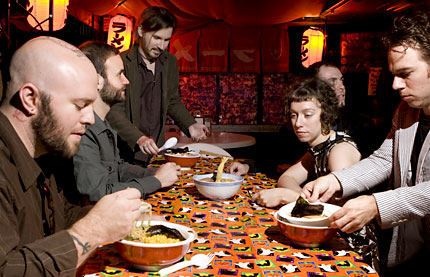 What’s the Deal? The lush melodies of Drawn to Dust explores Wabi-sabi, a Japanese idea rooted in finding beauty and grace in the world’s most ugly details. To channel all this greatness, Lichtenstein has recruited some of indie rock’s finest multi-instrumentalists — Gretta Cohn (Cursive, Bright Eyes), D. James Goodwin (Sol Seppy), Ryan Smith (A Million Billion) and Kevin Thaxton (The Silent League) — to gracefully flesh out these 13 take-me-as-I-am tales. From the rich organ-led folk number “Mistakes” to slinky snare-shuffler “So Lucky,” Lichtenstein’s pipes shine like a beacon of bedroom four-track purity. Additional outliers like the bold flamenco guitars of “Castaway” and the bright mandolin pop of “Confidence Shattered” also tap into Lichtenstein’s subdued magic à la Beck’s Sea Change.

Fun Fact: Lichtenstein is a trained trapeze artist. He tells SPIN.com, “I figure the circus would make a fine career if my musical inspiration ever dries up.”

On the Web:
Camphor at MySpace
camphor.net