Super Furry Animals Are Your ‘Venus’ 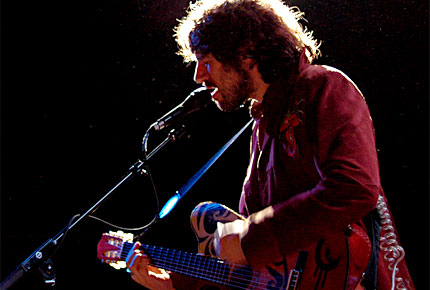 Featuring a peeled down jam session of their greatest hits, alongwith an introduction of some news ones in celebration of their upcomingrelease, Hey Venus!,Super Furry Animals made a stop at Brooklyn’s Music Hall ofWilliamsburg Friday night (Jan. 25). Famous for over a decade oftheatrical projections, light shows, and special sound features, theWelsh psych pop outfit took things down a notch this time around,gracing the stage in scruffy garb to leave all concentration on thetunes — they even allowed fans to choose the setlist via their website.

Afterseveral signature Beach Boys-esque pop songs and a couple new cuts(including new single “Run-Away”), the tinkering music box of “She’sGot Spies” sent the audience gazing about the room with the forlorneyes of teenagers at a high school dance. Soon singer Gruff Rhyspulled everyone from their dazes with crowd-pleasers like “Rings Aroundthe World” and “Juxtaposed With U,” as well as with a ridiculousaudience participation exercise of forming mouse-like ears of wigglingfingers, which apparently “helps to improve the acoustics of the room.”With all hands on heads, the room filled with a throbbing version ofthe band’s heaviest metal song, “Receptacle for the Respectable” beforea short intermission. Post-break, Rhys finally decked his signature redMighty Morphin Power Rangers-like helmet to finish the show,while lead guitarist Huw Buford pumped fists in the air in the ultimateaffirmation that the Super Furries are back and plan on staying! MARY-LOUISE PRICE / PHOTOS BY SHAWNA ADAMS

We asked: For their current tour in support of their 2007 LP, Hey Venus!, Super Furry Animals have allowed fans to choose the setlist. What songs did you or would you choose?

Marylouise Price
Tags: We Were There