Santogold, Band of Horses, and Simian Mobile Disco made our list of songs and videos you need to download now. 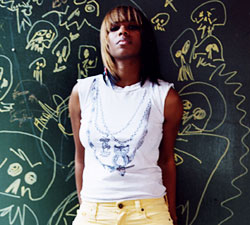 2007 is said and done, and Spin is prepared for 2008 with an eclectic, fresh list of 15 songs and a handful of videos by artists all prepared to wash away the mundane holiday season and push forward anew into the New Year. And this month’s list ranges from the punky grooves of Santogold, to the pop croons of Swede Lykke Li, to the Dylan-lovin’ duo of Calexico and My Morning Jacket’s Jim James, who join forces on “Goin’ to Acapulco.” Be sure to tune both eyes and ears to our list of must-see videos, too. “Band of Horses’ “Is There a Ghost” and Simian Mobile Disco’s “Hustler” video top our list.Santogold “Creator” Ex of Philly punks Stiffed, Santi White apparently had her life changed by M.I.A.’s Arular. And on this woozy monster groove, produced by Switch and FreQNasty, she gets her own mango pickle. LISTEN The Enemy “You’re Not Alone” These scrawny blokes look (and sound) like a U.K. hype band from hell, except on this rousing, clenched-fist anthem about a plant closing in their native Coventry.Grand Ole Party “Look Out Young Son” Led by drummer/singer Kristin Gundred, this San Diego trio (produced by Rilo Kiley’s Blake Sennett) is like a garage-blues school project from PJ Harvey’s firstborn. DOWNLOADPartyshank “Penis vs. Vagina” The DJ/producer duo of Party Sausage and I Will Shank You for a Penny are like a Brit answer to Hollertronix — but stoopider, whiter, and with more toys.Dead Kids “Fear and Fluoride” Squalling, pounding, and hip-huggin’, this post-punk U.K. quintet testify about paranoid conspiracies and toothpaste and the future like good little Suicide and Prince fanatics.DOWNLOADDoug Martsch “Cracked and Crazed” An artfully rambling, love-scarred ballad — written by director Devon Reed for the film The Bigtop — warbled with defiantly good-natured resignation. DOWNLOADKano “Kids Wiv Gunz” Repurposing the stolid thump of a Gorillaz track (from Demon Days), the East London rapper deftly bemoans the spell that firearms (and 50 Cent) cast on wayward youth.Estelle “American Boy” The London rapper/singer/producer (shades of Lauryn Hill) coos about her transatlantic crush over a sweet bourgie-disco groove from will.i.am, who is a far better beatmaker than syllable slinger. LISTENSebastiAn “Killing in the Name of SebastiAn” The Ed Banger-affiliated French DJ takes a Rage Against the Machine classic and edits it into a slinky, disorienting, even more blood-boiling electro rallying cry.The Black Ghosts “Something New” That other guy from failed ’90s Brit-rockers Simian — perky-voiced singer Simon Lord — returns with a Fender Rhodes-filled cut of yacht-rockin’ laddie soul. DOWNLOADJackie Chain “Blinded by the Light” Ridin’ a retardedly oversize Manfred Mann loop, this half-white, half-Korean Alabama longhair raps about the diamonds in his pinkie ring, etc. America, fuck yeah! DOWNLOADLykke Li “Little Bit” The Swede of the month is a 21-year-old brunette whose tentative, tuneful love song is buoyed by wispy indie-tronic production from Björn Yttling of Peter Bjorn and John.Black Tide “Shockwave” Like a (much) more melodic Megadeth, these Miami skate waifs — ages 15 to 19 — are a metal juggernaut so effortless they seem driven by an unseen force. And no growling or shrieking! DOWNLOADAnthony Hamilton “Do You Feel Me” A smoldering soul snapshot from the American Gangster soundtrack, with Hamilton’s wail summoning late-’60s Stax, but with his own timeless, emotional edge. DOWNLOADJim James & Calexico “Goin’ to Acapulco” This track from the I’m Not There soundtrack lacks the original’s craggy desperation, but the mournful horns and James’ flickering vocals do the trick.

Matthew Dear “Don and Sherri”
Dear makes glitchy, spooky songs about shady characters, but this clip ignores the lyrical narrative in favor of a striking visual swirl: kaleidoscopic city lights, jarring reflections, eerie silhouettes, and shifting shadows. Using multiple cameras and mirrors, directors Judy Welfare and Jeremy Hollister turn careless fun into sinister foreboding, like a night out gone horribly wrong. WATCH
Band of Horses “Is There a Ghost”
Though it occasionally threatens to morph into an ad for Bed Bath & Beyond, Band of Horses’ latest exposes the emotional savagery that can ensue when a sleeping person’s favorite pillow is stolen. The final scene ends up as an indie-rock 300, but instead of a Spartan bloodbath, it’s a block full of teenagers and parents unleashing a torrent of feathers. WATCH
The Pack “In My Car”
The practice of “ghost ridin’ the whip” — coasting in neutral, throwing your car doors open, and dancing on the roof — is both hilarious and dangerous, but these dudes push it to ridiculous extremes by cruising through outer space in a shiny white Chevy. They even create a goofy look-I’m turning-the-wheel dance to go along with the catchy novelty track. WATCH
Simian Mobile Disco “Hustler”
Rappers and R&B singers always misuse scantily clad women in their videos: All the honeys ever do is dance and get groped by members of the entourage. R. Kelly should take a cue from Simian Mobile Disco, who force their models to gorge themselves on fatty foods while striking seductive poses. Good luck keeping your lunch down during the gravy-assisted money shot. WATCH