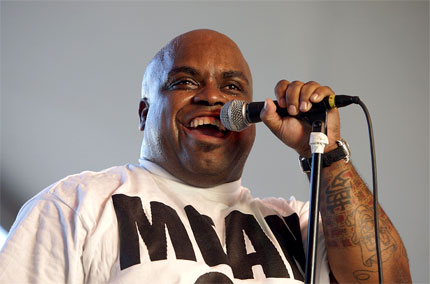 Pushing aside their solo endeavors, including a series of production duties for Danger Mouse, and a new label for Cee-Lo, space-funk duo Gnarls Barkley have emerged with The Odd Couple, their aptly titled follow up to St. Elsewhere, arriving at a yet-to-be specificied date in April via Downtown/Atlantic. According to Billboard.com, the duo are still wrapping the set in Los Angeles, where they’re now recording with live musicians. But for the impatient set, an unnamed track has leaked, and according to Pitchfork, a Gnarls MySpace bulletin encourages fans to “Hurry up and DIGG this before it’s pulled.” Have at it, downloaders, just beware of the evil RIAA!

While some golf, buy an RV, or head for Florida, eclectic popster Patrick Wolf likes to spend his retirement, well, not really retired at all, and is now preparing a live DVD and album for 2008. First up, the DVD: according to a MySpace blog post, the live disc was recorded at Wolf’s show at London’s Shepherds Bush Empire, and was “shot and directed by the photographer Brantley Gutierrez.” And the for the follow up to The Magic Position, Wolf is currently “loading up my old laptops, generating beats and writing, typing nonstop at the piano keys and computer keys, trying to communicate some of the journeys, misadventures, and experiences from the last couple of years…” [Via Pitchfork]

Less than five years after their split, raucous punk rockers Face to Face will reunite for a string of shows, many of which will be “select festival dates in the U.S.,” including Bamboozle Left in SoCal April 5, a statement confirms. “We miss playing these songs live. That’s the only reason,” founder and frontman Trever Keith said of the reunion. “We don’t plan on writing any new material or releasing new records as Face to Face, but we are looking forward to getting out there and playing for people.” Keith, whose band saw a series of lineups during its lengthy tenure, will perform alongside longtime bassist Scott Shiflett, guitarist Chad Yaro, and drummer Pete Parada. More live details will soon be announced.

Avid SPIN.com Book Club readers, and Artist of the Day alums the Matches have announced the release of A Band In Hope, their third studio album to date, slated to arrive March 18 via Epitaph Records. The new set, produced by John Feldmann (Story of the Year, the Used) and Mike Green (Paramore, Good Charlotte), among others, delivers 14 tracks including first single, “Wake the Sun.” “The portrait is more honest, exposed, and layered than we’ve ever been able to achieve,” frontman Shawn Harris said of the new effort. Catch the band touring in support of the record this spring, during which they’ll add to the ever-growing SXSW bill.

A Band In Hope tracklisting: