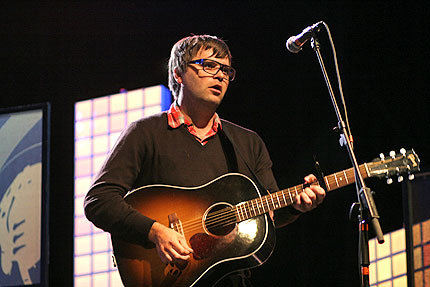 Sure, the follow up Death Cab for Cutie’s 2005 LP Plans may be “really weird” and, you know, sound “way more lunar than the urban meadow sort of thing” they’ve apparently been up to, but its title won’t follow in suit: Ben Gibbard and crew’s new record, slated to land this year, will be called Narrow Stairs. How very Death Cab of them. [Via Pitchfork]

Just as Brit sensations the Kooks are preparing to drop their new record, Konk, and are gearing up for a supporting U.S. tour, bassist Max Rafferty has departed the band, a MySpace post explains. “The band will be continuing with the forthcoming shows,” the post continues. “Dan Logan, bassist with local Brighton band Cat the Dog, will be filling in for the short term.” According to a Kooks spokesperson, the split was “most definitely on good terms.”

As you may remember, PB&J frontman Peter Morén has a solo project up his sleeve, the literary-tinged set titled The Last Tycoon. Well, now the album, a ten-track collection that has sat on the shelf for a few months, is ready to hit U.S. stores April 8 courtesy of Morén’s new label, Quarterstick. Naturally, to show off his new work live, Morén will hit SXSW, among other cities on soon-to-be announced spring outing.

The endearing soundtrack to the 2007 film Juno, which predominantly features tracks by the Moldy Peaches, and its co-founder Kimya Dawson, in addition to the likes of Sonic Youth and Buddy Holly, has hit the No. 1 slot atop the Billboard Top 200 chart! Marking Rhino Records’ first No. 1 ever, the soundtrack, which, telling of the suffering music industry, only sold a measly 65,000 copies in the U.S., is the first film soundtrack to hit No. 1 since 2006’s Dreamgirls, and is the first from an Oscar best picture nominee since Titanic topped the charts in 1998. Elsewhere on the charts, Radiohead’s In Rainbows, which debuted atop the charts in early January, falls from 4-5 with 35,000 copies sold, a 24 percent decrease. [Via Billboard.com]