In My Room: Ween

Rock jesters Dean and Gene Ween invite us inside their Pennsylvania studio. 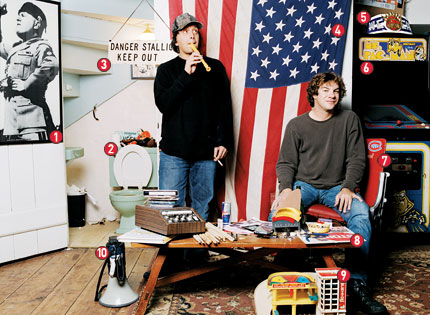 1. MUSSOLINI POSTER Dean: “That’s my poster. I’m Italian, and my wife calls me a fascist dictator. So I keep the picture around to remind everybody who’s boss.”

2. BATHROOM
Gene: “I always liked this bathroom. It’s cozy.” Dean: “It just doesn’t make sense; why would you have a bathroom that opens up into a living room?”

3. SIGN
Gene: “We have a big stallion thing. There’s, like, five Ween songs that are about stallions. Somebody gave this to us; it’s from a farm, I assume.”

4. FLAG
Gene: “We stole the flag from a church…” Dean: “We used to rehearse in a church, which was then sold and was going to be turned into a parking lot. We were the last occupants, so we took some stuff.”

5. CHOCOLATE AND CHEESE BELT
Dean: “Should we lie about the belt? Fine, we’ll just say the truth: This isn’t the original belt.” Gene: “There was a design firm that came up with the cover for Chocolate and Cheese — with the almost naked girl wearing the Ween belt. They made the belt, found the model, and hired the photographer. And when we tried to get the belt, nobody responded. They took it! This is a re-creation.”

6. MS. PAC-MAN MACHINE
Dean: “This came from my uncle in New Jersey; I bought it off him for $50. It’s got a dial on the back where you can speed it up. So if you’re a greedy store owner, you can turn it up all the way so it’s basically impossible to get past the first level.”

7. STADIUM SEAT
Dean: “I bought this on the Internet after they closed the Montreal Forum — it’s an actual bleacher seat. The Montreal Canadiens are the winningest sports team ever, except for the Yankees. Look it up — the Yankees have 26 World Series, the Canadiens have 24 Stanley Cups. It’s not comfortable; I just like the way it looks.”

8. STOP SMOKING, STOP OVER-EATING WITH REVEEN LP
Gene: “It’s this unbelievable record that tries to hypnotize you into not smoking or overeating. He just talks in this really low voice. It’s one of the best records to smoke out to ever!”

9. PLAYSKOOL GARAGE
Gene: “This was mine when I was a kid. I’m going to let my son play with it, but I need to clean it off first.”

10. MEGAPHONE
Dean: “We use this for songs like ‘The Mollusk,’ ‘Stroker Ace,’ and ‘ReggaeJunkieJew.’ We have a backup — they tend to break when you spike them into the stage.”

Jennifer Edmondson
Tags: In My Room

In My Room: The Pains of Being Pure at Heart’s Kip Berman