In My Room: Sia

The quirky Aussie singer/songwriter shows us her art-filled Manhattan loft. 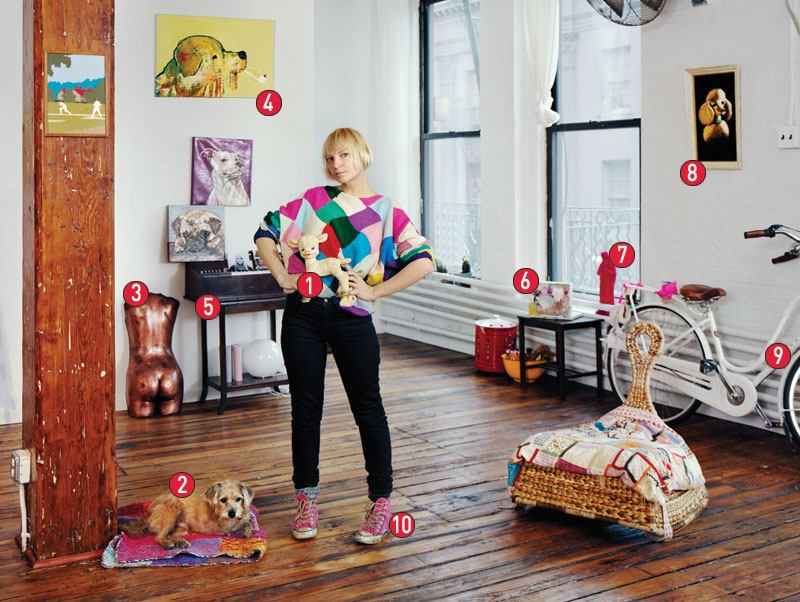 1. TOY LAMB “I bought it for a friend for a dollar at this funny little auction in Australia, but then I couldn’t give it to her, because it was too cool. It’s also an instrument. [Blows into a hole on the lamb’s belly] See?”

2. LICK-LICK “When I walked into the pound, he was already missing a leg — it was bitten by a coyote — and he was so nonplussed, so bereft, and he looked at me like, ‘I cannot be bothered.’ I thought, ‘I just have to have you!’ He’s like a furry handbag, a furry slug. I named him Lick-Lick because he was just so licky.”

3. SCULPTURE “A fan sent me this. It’s a cast, with the lyrics to my song ‘Breathe Me’ engraved on it. She did it for an art gallery show, but it didn’t sell. So she sent it to me. I’m not sure if it is her ass. Imagine if I had a fan’s ass in my house — that’s dope!”

5. KEYBOARD “This is an air-powered keyboard, but it’s in a funny key. When I write a song on it, I have to sing it to a friend who can transpose it and write it down, because it’s not in tune with anything else.”

6. LAPTOP “I really like what technology can do for me, but I like things to look comfortable, so I drew a picture on it. Yeah, I’m crafty. It’s me, hanging out by a mountain.”

7. VELVET JESUS “I got this in a kitsch shop in Brighton, England. It’s a money box with a slot in the back. Every now and then I empty it and donate the coins to the Change for Good charity they collect for on airplanes.”

9. BIKE “My ride was customized for Burning Man — toilet paper on the back, glow sticks on it, and a drink holder for my tequila. I haven’t ridden it in New York yet, because I’m still enjoying walking. I generally stay in a six-block radius of this place.”

10. PINK CHUCK TAYLORS “I got these at a secondhand shop in England. I bought them especially because they make people think I’m a skateboarder and that I’m really cool, when really, I can’t skate for shit.”

MORE ABOUT SIA: Born in Australia, Sia Furler is something of a nomad: She’s lived in Japan, London, Italy, and Los Angeles. “If anything becomes uncomfortable, I generally just move,” says the 32-year-old, whose recent Some People Have REAL Problems features many lyrics about leaving and running away. “I think there’s enough magnetic electricity to keep me here.” At least for another five years, the length of her new lease. “It was a real-life sweatshop, a shithole,” she says. “I spent all of my advance doing it up.”

Michael Endelman
Tags: In My Room

In My Room: The Pains of Being Pure at Heart’s Kip Berman