Liars: No Pain, No Gain 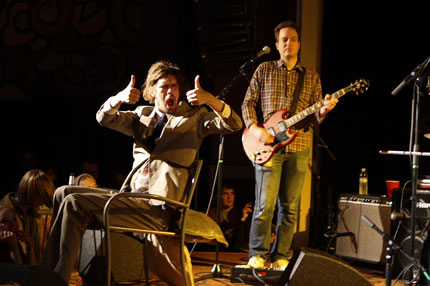 “I really appreciate you guys being here. It’s an honor to play for you,” Liars’ towering lead singer Angus Andrew generously remarked last night (Jan. 28) at Portland’s historic Wonder Ballroom. Clad in a tan thrift-store suit, the Aussie-born frontman — who has previously garnered some well-deserved notoriety for his intense, wild-child stage persona and imposing bird-like figure — was somewhat hampered by a recent bout of back spasms, thus confined to a plush velvet chair for much of the group’s hour-long performance.

But as the band rummaged through new Liars tunes like “Cycle Time,” “Plaster Casts of Everything” and the aptly titled fan fave “Freak Out,” which blended electro-acoustic elements, gloomy atmospherics, tribal beats, zombie chants, and gauzy, droning interludes to good effect, Andrew didn’t sit idle for too long. Holding a red balloon that he had previously plucked from the air as it meandered innocently above the stage, Andrew made a final effort to get into character come encore time; he lumbered around the stage, shrieking and gesturing uncontrollably, while closing the ear-bleeding set with classics “Hold Hands and It’ll Happen Anyway” and “Let’s Not Wrestle Mt. Heart Attack” until he could no longer endure the pain.

We asked: On the Liars’ latest studio effort, there’s a inventive, statement-of-purpose song entitled “Freak Out.” What freaks you out?

Travis Greenwood
Tags: Portland, We Were There