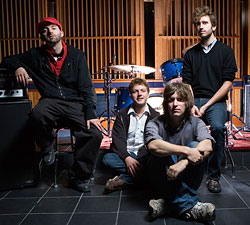 Who? The Epochs’ co-vocalists (and brothers) Ryan and Hays Holladay released Ten Billion Light Years of Solitude on their own in 2003 before recruiting Kevin Smith on bass and Kotchy on drums. After an appearance at the CMJ Music Marathon last fall and additional dates with the likes of the Mobius Band and Middle Distance Runner, the Brooklyn-bred foursome prepped for their proper self-titled debut LP, which drops Feb. 19 via the Rebel Group.

What’s the Deal? An epoch is defined as a singular period of time, which is strange as the Epochs draw from multiple decades in the creation of their sound. “Opposite Sides” finds the band using blips and bleeps like a stateside Radiohead, but that’s not where the band’s aural influences stop. The vocals recall fellow Brooklynites TV on the Radio, as they swirl around each other, pushing higher and higher throughout the LP, especially on the atmospheric “Mouths to Feed.” “Love Complete” practically comes on to you like some lost gem from a 1970s soul compilation, and “Picture of the Sun” and “Stand Up and Be Counted,” with vocals both gasping and lilting, sound like nothing less than a slightly more polite (but no less sex-soaked) Prince.

Fun Fact: Last year, the Epochs won the first Eclipse Sets the Stage Contest, which gave them the chance to play at CMJ (plus a bunch of cash, which is, you know, nice). This wasn’t a half-bad coming-out party in New York, where the band had returned the year before after spending some time living in Seattle.

On the Web:
The Epochs at MySpace