Breakout of the Year: Feist

One of Feist’s backup singers, Mary, is crying. Another, Diane, holds an ice pack to her own bruised and swollen hand. At first glance, it would seem as though things backstage at Saturday Night Live‘s NBC studio have gone horribly wrong for tonight’s musical guest, when in fact the opposite is true. Soon, the 31-year-old Canadian singer/songwriter will wind down her second performance of the evening, the trembling rock song “I Feel It All,” and a small crowd, which includes several black-clad choir members from the first number (“1234”), has already gathered in the hallway near the studio’s entrance to congratulate her. The tears, it turns out, are happy ones, and the hand injury — well, blame it on some very vigorous backup clapping.

Feist — or Leslie, as she’s known to friends — strides through the double doors to an eruption of applause. She’s grinning widely, but she looks a little baffled as she works her way toward her dressing room. “Fran Drescher said hello to me,” she whispers to banjo player Kevin Barker. “As if this day couldn’t get any weirder.”

What’s weird is that Fran Drescher made an impression on Feist at all, especially considering that earlier in the week, Paul Simon was asking for an introduction. But then, that’s the kind of year it’s been for Feist, following the May release of her third solo album, The Reminder — suddenly, the Nanny and the guy who made Graceland are as interested in her as indie obsessives are. Moreover, that’s the sort of week it’s been — she has already had to cancel appearances on the Today show and The View, as well as a concert in Brazil, due to illness, and feels lucky to have made it through SNL intact. “It’s like being a ship that’s used to floating around, avoiding icebergs under the cover of night, and then all of a sudden, it’s broad daylight,” Feist says two days later, between bites of room-service lunch in a Portland, Oregon hotel room. “You’re the same little ship. You just feel exposed.” 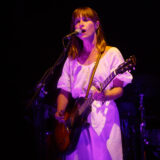 She’s referring largely to the moment in September when her bittersweet but uplifting single “1234” and its accompanying thrift-store Busby Berkeley video made the leap from YouTube curiosity to pop-cultural touchstone, courtesy of whoever picks songs for iPod commercials. Before then, Feist had been playing music for almost half her life without ever approaching this kind of success. (The Reminder has already moved 350,000 copies, more than double her previous album, 2004’s Let It Die.) But for this erstwhile member of Broken Social Scene, the corporate-wary Toronto collective that behaves more like a loose-knit family, a licensing deal can be a little stigmatizing.

“I didn’t really think about what [the commercial] would mean or how I’d be defined,” she says, “but I have become a spokesperson for the act of letting your songs be used. And that’s heavy on my shoulders, because I don’t have any insight. For me, the decision was purely about amplifying what I had already done.”

Hand-wringing aside, it’s hard to argue against anything that promotes the video’s three minutes and 22 seconds of sheer bonhomie: Feist, looking like a movie star (or maybe just a hot bartender) in a blue-sequined jumpsuit, twirls, claps, crowd surfs, and forms kaleidoscope swirls with a few dozen of her colorfully dressed, carefully choreographed friends to a chorus of ba-da-ba-da-das. The whole thing seems totally spontaneous, thanks to director Patrick Daughters, who masterfully captured it in one uninterrupted shot.

“The video is pop confection, but it has integrity,” says Daughters, who is less ambivalent about the clip’s reappropriation. “This was a labor of love, and for it to become the platform for a company to make a lot of money selling stuff is not ideal.”

But, he adds, “1234” functioned as a “gateway drug” to the rest of the album, full of equally delicate, tremulously delivered treats, including the creepily somnolent “Honey Honey” and the smoke-fogged ballad “Limit to Your Love.” “It’s an honest record,” Daughters says. “Her sincerity and charisma really come through.”

Mass appeal, however, was never part of the plan. In fall 2006, she holed up with her band and several producers (including Let It Die‘s Chilly Gonzales) in an old four-story house outside of Paris, where Feist rents an apartment. (“I share a flat,” she clarifies. “It’s not like I’m so flush I have an apartment in every city!”) She was so wrapped up in her work, she was oblivious to riots erupting a few miles away. “Paris was full of fires the week and a half we were there,” she says. “We were joking that the aristocracy would have felt like we did. Like, ‘There’s a rumble on the horizon! The people are rising!’ while we had our smoking jackets and baguettes. We had no sense of what was going on in the real world.”

Studio 8H at NBC headquarters in Rockefeller Plaza doesn’t seem any closer to reality than a Parisian manor. Backstage at SNL, the show’s host, news anchor Brian Williams, eagerly poses alongside Feist for a photo (she was his personal choice for musical guest after Bruce Springsteen couldn’t make it). As Williams rushes off to a skit, Superbad star and fellow Canadian Michael Cera, who dropped by for a visit and has been timidly leaning against the Weekend Update desk, wanders over to introduce himself. If there was any suspicion that fame might have changed either of these newly minted stars, their animated discussion about Ontario’s highway system dispels it: They are just as awkward and prone to small talk as anybody else.

“Only when I shake my head and see what’s happening from the perspective of more than 20 minutes ago is it pretty astounding. But I try not to do that, because then nothing catches me off guard,” says Feist in her Portland hotel suite. “It’s like being on a waterslide: I’m on it, there’s momentum, and at some point, I’ll get spit out at the bottom and it will have been what it was.”