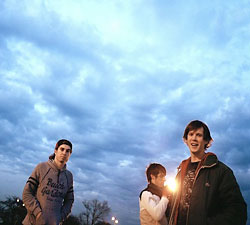 The soundman is right. Two hours later, after the show, Gispert and drummer Julian Dorio sit nursing their shredded throats with beers in a dumpy hotel room. (The band also includes bassist Tim Deaux.) Formed while attending the University of Georgia, the Whigs honed their live chops the DIY, get-in-the-van way. “We’d drive 12 hours up to Philly for a show…and then get back for Monday-morning classes,” says Dorio, futzing with his backward ball cap. “It was pretty brutal.” But the marathon drives paid off: Their self-released debut, 2005’s Give ‘Em All a Big Fat Lip (recorded in an empty frat house), caught the attention of ATO Records, which signed them and then flew the trio out to craft their sophomore album in Los Angeles with Rob Schnapf (Elliott Smith, Beck) last summer.

The result is Mission Control, a collection of rousing rock’n’roll fundamentals that recalls blue-chip alternative acts such as the Replacements and Superchunk. Powered by Dorio’s Herculean tom-rolls, opener “Like a Vibration” sets a high standard for the album — tightly constructed tunes, wiry guitar shards, and ecstatic, beer-soaked choruses. “The hard thing is constructing a concise, three-and-a-half-minute pop song in a new, creative way,” says Dorio. “And that’s always been our thing.”

By hewing closely to such venerable values — songwriting, hard touring, musicianship — the Whigs can seem like an anachronism, especially compared with some of their more genre-mashing, fashionable peers on the indie-rock circuit. “I feel like we don’t fit in sometimes, because we’re simply the most normal thing going,” explains Dorio. Normal, however, doesn’t have to mean mundane. “Just because you play pop music doesn’t mean you have to be like Nickelback,” says Gispert, who proves his point every time the Whigs step onstage.

Now Hear This:
The Whigs – “Right Hand on My Heart”

William Goodman
Tags: the whigs, This Is Happening