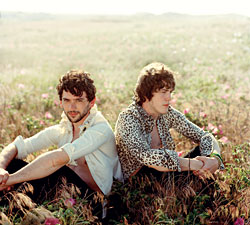 Last winter, MGMT began to think the world might end. So Andrew Vanwyngarden and Ben Goldwasser did what any reasonable neo-hippie music majors would do: They decamped to a desolate sliver of Brooklyn and concocted some seriously freaky songs. “Something’s about to go down,” explains Goldwasser, a paisley headband keeping his brown curls in place. “Things are going to change in a way nobody will be able to fix.” Vanwyngarden concurs. “The apocalypse is in the zeitgeist,” he says between sips of stinky Kombucha. “But it doesn’t have to be about death and destruction; it could be the shattering of a mass hallucination…where the human race realizes its true potential!”

Since teaming up in 2002 at Connecticut’s Wesleyan University, Goldwasser and Vanwyngarden, both 24, have done more to induce visions than destroy them. The pair dabbled in noise rock and hip-grinding electronica before settling on their current brand of shape-shifting psychedelic pop — a sound deeply indebted to beard rockers like Genesis and neo-lysergic warriors such as the Flaming Lips. After a six-song EP on indie Cantora in 2005, they soon snagged a deal with Columbia, which recently released Oracular Spectacular digitally and will distribute it to stores in January. So, how do the shaggy duo explain their sudden ascent? “I’ve been thinking our songs were transmitted to us by benevolent beings,” says Vanwyngarden. “It’s the only way we could understand getting on a major label.”

Columbia’s Maureen Kenny — who signed them — laughs at that idea. “I don’t think they give themselves enough credit!” she says. “They’re unusual creatures, but they have a strong pop sensibility.” The disco fantasia of “Electric Feel” and the Moog-laced burner “Time to Pretend” share both groove and philosophy with early Prince. Freak-rock specialist Dave Fridmann — who’s worked with the Flaming Lips and Mercury Rev — produced, adding textures that help turn MGMT’s deliriously melodic tunes into stoner manna. Still, with lyrics inspired by Mayan prophecies and conspiracy websites, the album is no blissed-out trip. “I’ve listened to it on acid before,” says Vanwyngarden. “It was too chaotic.” Even apocalyptic prophets need to chill.

David Marchese
Tags: This Is Happening