In their first and only joint interview, epic-rock auteurs -- and new BFFs -- Bruce Springsteen and Win Butler talk about the early days, the glory days, and even the end of days. 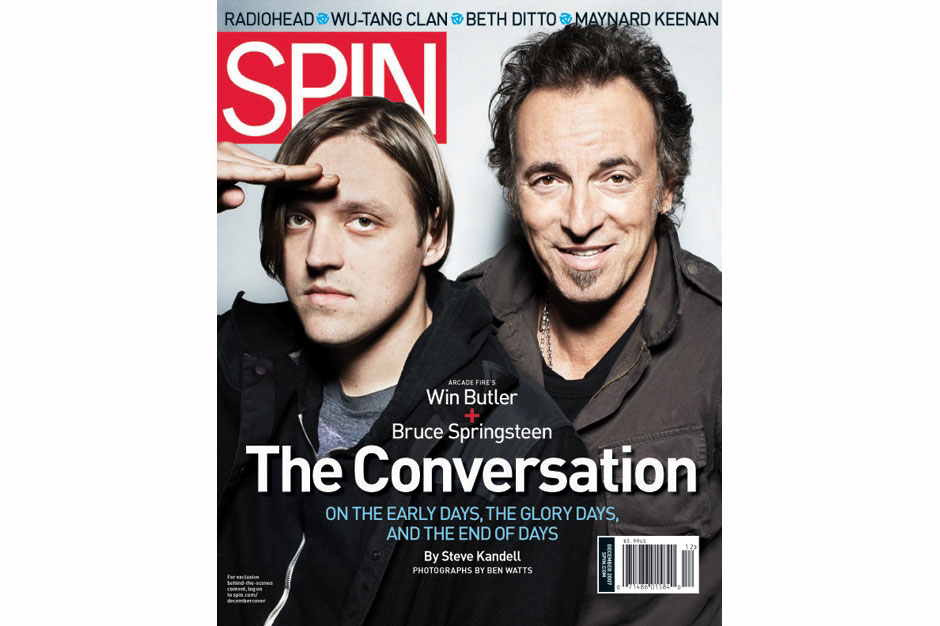 “Welcome, Canadians!” Even at soundcheck, Bruce Springsteen treats a New Jersey venue like his home, and Arcade Fire’s Win Butler and Régine Chassagne are honored guests. “Did you guys finish your tour?”

Watching from the floor of the Continental Airlines Arena hours before Springsteen’s first official hometown show with the E Street Band in five years, house lights up, Butler shouts back that they wrapped up the American leg three days ago and will leave for Europe in two weeks. Springsteen nods, then leads his band through a version of “Backstreets; so sweeping it’s a shame only five people are here to witness it.

Since his breakthrough 1975 album, Born to Run, Bruce Springsteen has been the future of rock’n’roll, a folkie, a misunderstood patriot, wildly popular, not particularly popular, a workhorse, a stay-at-home dad, a firebrand, a name brand. But moreover, he’s just been. His 15th studio album, Magic, which debuted at No. 1 in October, is vintage Boss and just might contain one of the best songs he’s ever written (the lush “Girls in Their Summer Clothes”). Meanwhile, a new generation of bands — of which Arcade Fire are certainly at the forefront — reveres him as much for his varied body of work as for the fact that he just seems to have done things the right way. Never embarrassed himself, never embarrassed those who look up to him. And likewise, Springsteen — more wide-eyed geek than stately elder — has been energized by these younger artists; when he greets Butler and Chassagne after soundcheck, the first thing he mentions is the fan-made YouTube clip for their song “My Body Is a Cage,” set to scenes from Once Upon a Time in the West.

Though they hail from different generations (Springsteen is 58; Butler is 27) and backgrounds (Springsteen: working-class New Jersey; Butler: well-heeled Houston suburb, prep school at Phillips Exeter) and project different personas (Springsteen fronts the world’s best-paid bar band; Butler and crew can come off as austere and vaguely Amish), there is a natural kinship. When Arcade Fire’s Neon Bible was released in March, much of the praise cited “Keep the Car Running,” “Intervention,” and “(Antichrist Television Blues)” as exercises in Boss-worship, and though Butler is quick to admit this is no coincidence, the strongest parallels are not strictly musical. Both men front large bands composed of friends and family, engineered to operate insulated from and autonomous of the vagaries of the industry. Of all the highly touted acts to debut in the past few years, Arcade Fire are perhaps the easiest to imagine still at it in 30 years — hair thinner, waists thicker, but still kinetic, even if Richard Reed Parry has to, as his E Street counterpart Clarence Clemons now does, take the occasional time-out on a stool, stage right.

Shoulders hunched in a black hoodie, blond hair falling over his eyes, Butler not only doesn’t seem austere or Amish, he doesn’t even seem 27. Determined not to wear out their welcome — or wear themselves out — Arcade Fire are winding down after nine months of touring and will likely spend chunks of 2008 writing and recording at their studio, a converted church outside Montreal. “The real test is finding your own life within the bubble of shit,” Butler said at a Manhattan café before leaving for Jersey. “The hard work we did last record to set up that studio was so that the creative ebb and flow of the band could happen in a natural way.” (He and Chassagne will perform one more time this year on North American soil — they just don’t know it yet.)

Butler met the Boss once before, at a Grammy after-party in 2005, but wasn’t sure if Springsteen would remember. He does. In fact, it is his interest in speaking to Butler that brings us here today. I am not interviewing so much as eavesdropping.

Standing sentry on a metal folding chair outside Springsteen’s dressing room is a giant stuffed panda, a tribute to Terry Magovern, Springsteen’s longtime aide de camp, who died this summer. The panda grants us safe passage, and as we sink into the black leather sofas, Butler offers a gift of three books: George Orwell’s manifesto Why I Write, Cormac McCarthy’s postapocalyptic The Road, and Tracy Kidder’s inspirational Mountains Beyond Mountains. Springsteen leafs through the pages, grateful and beaming. On a wardrobe rack against the far wall hang black vests, black shirts, and black jeans. “Think I’ll go with the black tonight,” he says.

SPIN You both encountered a lot of hype very early in your careers. How do you handle that sort of attention when you barely even know what you’re doing yet?

WIN BUTLER Having my wife [Chassagne] on the road and having the whole band around to share that experience made the noise a little less pervasive. We’re in our own world, putting songs out to people, and all that was coming from the outside world. It was almost like watching a movie.

BRUCE SPRINGSTEEN That’s true. When I was 24 or 25, I ended up on the cover of Time and Newsweek, which I found both thrilling and embarrassing simultaneously. Everybody had different responses — I remember [guitarist] Steve [Van Zandt] buying copies and handing them out by the pool at the Sunset Marquis. He was like, “This is the greatest, we’ve hit it!” And I was more like, “I’m going to go up to my room for a little while.” I think if I had been by myself, it would have been a lot tougher. Having the band there — knowing that ten years have gone by before this moment, knowing that tonight we’re gonna go out and do the same thing we did in Asbury Park for 150 people — provided an element of sanity. It’s the bargain you ask for, but at the same time, it’s nice to have your friends around you.

Not only do you have your friends around you, both onstage and on the business side, but your wives are in your bands. And Win’s brother Will is in Arcade Fire. Does that extended-family construct make things easier or just raise the potential for tension?

BUTLER For us, the closest the band has ever come to not working was when we first made a leap and started to need people on the road in order to function. The first couple guitar techs were total lifers; we didn’t know any of these people, and we’re spending all this time with them on a bus, and it was like, “Who the fuck are we? This doesn’t have anything to do with why we play music.” Over the last few years, we’ve made it so a lot of the people we work with have personal relationships with us; we can really be in our own skin. That’s why we have so many women with us on the road — otherwise, it just turns into this weird, horrible dude party.

SPRINGSTEEN We started out as a boys’ club, and that lasted until 1984, when Patti [Scialfa, Springsteen’s now-wife] joined. She always teases me, because she says on the first night she played with us, she came into my dressing room wearing a frilly blouse and asked, “How’s this?” And I said, “Why don’t you just pick something out of there?” and pointed to my suitcase on the floor filled with T-shirts. So we made the transition, but it was a slow one. We were trying to move away from the dude party. When we started out, we played to a lot of audiences full of young guys, which I always said was the result of a homoerotic undercurrent, obviously. But as time passed, they brought the girls.

Well, you used to kiss Clarence onstage a lot. No homoerotic undercurrent there.

BUTLER Not enough artists build it up the right way. You start with the guys, then get their girlfriends to come. That’s how you get the loyalty.
SPRINGSTEEN I want people to look onstage and see themselves. That idea of the band as a representative community — all the bands I like have some element of that. It’s thrilling when you see that communication. Pop records are fun — [Rihanna’s] “Umbrella” I can enjoy tremendously — but what I’m drawn to are bands where there’s an active collective imagination going on between them and their audience. That’s what I love about Arcade Fire — the first time I saw you guys, I thought, “There’s a whole town going on up there, a whole village onstage.” There’s an imagined world you’ve made visual in front of your fans’ eyes, and it’s a really lovely thing.

Read the complete Springsteen/Butler interview in the December issue of Spin, on newsstands now.