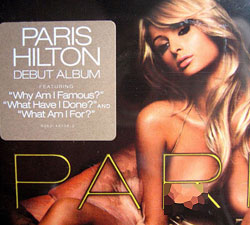 Over the weekend, British papers discovered that Banksy, the artist who notoriously sneaked fake versions of famous paintings into art galleries last year, replaced as many as 500 retail store copies of Paris Hilton’s debut CD with a retouched and remixed version. Now, it has been revealed that Danger Mouse — the producer behind Gnarls Barkley, Gorillaz, and the famous Grey Album — is behind the remix portion of the disc. Along with completely reworked liner notes that included topless photos of Paris slathered with slogans like “Every CD you buy puts me even further out of your league,” the CD featured remixes of Hilton songs by someone credited as “DM,” letters that stand for Danger Mouse. The song titles were also changed to names like “Why Am I Famous,” “What Have I Done,” and “What Am I For.” According to an email from his management company obtained by SPIN.com, Danger Mouse met Banksy in London while shopping for disguises. The two had one singular statement about the project: “It’s hard to improve on perfection, but we had to try.”

Talk: How hard are you laughing?