How did three beer-chugging, groupie-grabbing white boys in matching Chinese gym suits become hip-hop elder statesmen and the brains and conscience of alternative culture? Old roommates, high-school friends, funky bosses, hangers-on, and the occasional pop star cough up everything you never needed to know about the Beastie Boys. 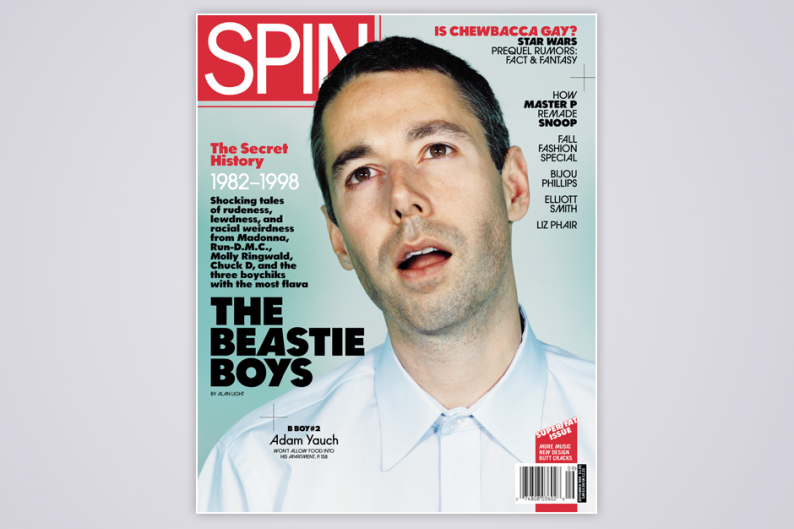 John Berry (former Beastie Boy): When I first met Adam Yauch, he was the funniest motherfucker I’d ever met in my life. He had this incredible knack for picking up somebody’s voice. He was really into Monty Python, especially the “Silly Walk” skit.

Adam Horovitz (a.k.a. King Ad-Rock, Beastie Boy): I have this memory of seeing Yauch at a record store. He wore an overcoat and boots and just looked funny. I’m not saying that I looked cool. But he looked funny.

Sasha Frere-Jones (member, Ui; journalist): I went to St. Ann’s in Brooklyn Heights, this private progressive school. Mike D came in as a junior. He was from Manhattan, wore an Isaac Hayes T-shirt, was into punk rock, and instantly started hanging out with all the good-looking girls.

Kate Schellenbach (former Beastie; member, Luscious Jackson): Yauch would come by and try to play the bass. He knew “Public Image” by Public Image and that was it. Like, two notes. And then we started switching instruments around — I played drums — and making up songs about the bodega downstairs. Mike D had nothing to do, so we made him the singer.

Yauch: The idea was “let’s start a hardcore band,” kind of as a joke. We called it the Beastie Boys. We were trying to think of the stupidest name, something that maybe sounded like the Angry Samoans.

Berry: This may be arguable, but I think I actually came up with the name. We decided that we should have a gang, an Elks Lodge-type thing. We had secret handshakes and stuff, and we’d wear old-man clothes from the Salvation Army and smoke cigars. The thrust was to walk around and annoy people.

Yauch: Our first gig was a party at John’s house. It was my 17th birthday, and we bought a bunch of beer. I think it was the first time Mike ever got drunk. After we played, Dave Parsons, who ran the record store Rat Cage downtown, came up and said, “I’m thinking about starting a record label — would you guys want to make an album?”

Scott Jarvis (recording engineer): Between the time we recorded Polly Wog Stew and when we mixed it a few weeks later, the 171A studio went under. The guy running it was on the road with Bad Brains and was supposed to be sending the rent, but it never came. The ex-girlfriend of the guy who actually owned the space came by and told me that he was going to sell the equipment — which didn’t even belong to him. So I took the tape machine over to my girlfriend’s apartment and laid everything out on the bed. Everyone came over and we did the mixes there, editing it together with, like, Scotch tape.

Schellenbach: We played only a handful of shows. But they were good — we played [the Alphabet City club] A7 with Bad Brains, we opened for Circle Jerks.

Darryl Jenifer (member, Bad Brains): We were fucking with Mike, trying to intimidate him — just Rasta shit — so they created this other band, the Imperial Knights of Schism. Instead of being fucked over, they started a band and made fun of our dialect and the way we looked. Mike put on blackface and a mop on his head — he had the balls to do that!

Thurston Moore (member, Sonic Youth): The Beasties weren’t like street rats — they obviously had this edge over everybody else. Their humor was a little more sophisticated, not just fart jokes. Mike D was this skinny kid jumping in the air and landing on the stage like a screaming little bird.

Berry: I became less and less interested and started missing rehearsals. A couple of times I showed up really fucked up on crystal meth.

Horovitz: After their record came out, my band, the Young and the Useless, started covering Beastie Boys songs. When John Berry went AWOL, I took his spot. I came up from the minors.

Schellenbach: We were all getting into Grandmaster Flash and the Sugar Hill Gang and Funky Four. The Roxy and Danceteria were happening, and everybody was into break dancing and graffiti and trying to write rhymes.

Tom Cushman (friend): Over Christmas vacation, right before Michael had been invited never to return to Vassar again after only one semester, we decided to do a song. At the time, the thing in rap was this stay-in-school concept, so we wrote “The Reading Rap”: “Reading and rapping and you’ll be down / It’s in the mix, hear it in the sound / Hit the books, but don’t hit the street / And avoid the ends that you might meet.” We called ourselves the Beat Brothers.

Yauch: We went into the studio with a bunch of songs, but they were kind of half-written and never really came together. While we were in there just messing around, we recorded “Cooky Puss” and “Beastie Revolution.”

Schellenbach: “Cooky Puss” started getting college radio play, and we thought we should incorporate some kind of hip-hop experience into the live show. And that’s when Rick Rubin came aboard. I don’t quite know who found him, but it was like, “This guy goes to NYU and he could be our DJ.” We called him DJ Double R.

Rick Rubin (cofounder, Def Jam Records): I was the chairman of the social committee, and a DJ, and the Beastie Boys started coming to these parties at my dorm. They asked me to DJ for them since I was a friend of theirs and had a bubble machine.

Doctor Dre (former Beastie DJ; radio host, Hot 97, NYC): Rick had no skills. He would just play the record. But he had a lot of good DJ movements. He’d bob his head a lot.

Cey Adams (Horovitz’s former roommate; graphic designer): Rick would pick up the tab, which played a big part in us hanging out with him. At that time, the band was still wearing plain clothes. Then somebody got the idea to try and look a little more hip-hop. I think it was Rick. For the record, anything silly was usually Rick’s idea.

Rubin: We went to Chinatown and got these matching Chinese jogging suits, and we all had matching Adidas and Puma suits, too. We used to wear do-rags on our heads, which was kind of ridiculous.

Thomas Beller (former Beat Brother): No one ever actually said, “Kate, you’re out.” She went away for the weekend, and Rick bought the other three members matching Adidas sweatsuits, red and black warm-ups, and sneakers. They were at the [Manhattan] club Area dressed up like a trio and Kate bumped into them, kind of by accident. She just started crying, because it was obvious that there was not going to be a woman in a band that’s, like, going to have an inflatable penis on stage.

Schellenbach: Rick’s influence was really hard to deal with. Everybody in our crew was very open and not sexist at all, and Rick was this piggish guy from Long Island, or wherever the hell he was from. He was really sexist and homophobic, and they were all getting into his persona because they thought he was cool. And they were also getting into what they thought a hip-hop group was supposed to act like, grabbing their dicks and talking about girls. It was very disappointing and alienating.

Adams: The first time they got any money was when they sued British Airways for using part of “Cooky Puss” in an ad. Horovitz worked at a little ice cream shop that was like our club house. The minute they got that check, he quit his job and would buy stuff for everybody. It just felt like paradise.

Michael Diamond (a.k.a. Mike D, Beastie Boy): That money enabled us to make the move for independence. We got a floor in this Chinese sweatshop building on Chrystie Street [on the Lower East Side of Manhattan].

Yauch: The floor was blacktop. Somebody had actually rolled out tar across it, like the street. One time we were hanging out in the living room and we heard this really loud explosion in the kitchen. Our toaster oven had a hole in the top and a hole in the back. There was a hole in the wall behind it and a hole in the ceiling. Apparently, somebody upstairs fired a gun through the floor. We ran up there and there was nobody in the room but this old woman. We were like, “What happened?” and she didn’t speak English. You know some crazy shit had just happened in that sweatshop and they had quickly covered it up. Dragged the body out.