After seven albums fraught with angst, Sebadoh has cornered the market on slacker anxiety. And Lou Barlow — a.k.a. the Most Sensitive Boy in Indie Rock — is trying to deal with it one freakout at a time. 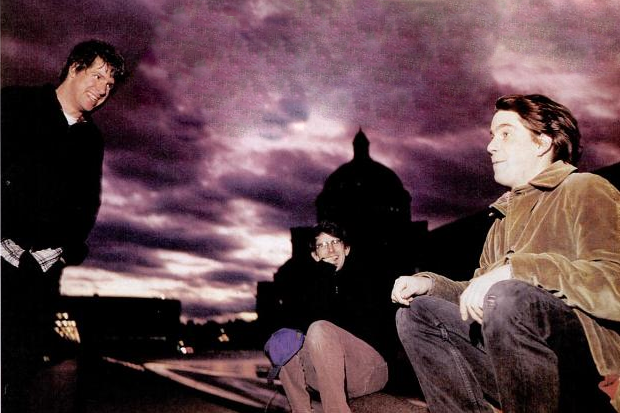 Early on, boys learn that to grow up you have to shut down. The message is loud and clear: Repress yourself, don’t express yourself, to pervert a Madonna lyric. It’s even been said that guys don’t remember their dreams because those dreams are usually so lousy with sublimated sexual tension. Best to wake up, forget, get drunk, watch ESPN, argue with your significant other about your co-dependent, self-styled nightmare of a relationship, and write a song about it, as singer-guitarist Lou Barlow did on Sebadoh’s Bakesale, the band’s tentatively romantic, breakthrough seventh album.

“Yeah, I guess our songs are meant to be these little revelations unto themselves,” says Barlow, gazing at a muted Simpsons episode in his not-as-shempy-as-you-might-think apartment, having just finished a 32-city American tour in 35 days.

Padding around barefoot, wearing a Cheerios T-shirt and black jeans, he’s more excitable than brooding, contrary to most reports. “It’s like finding out, ‘Oh my God, this is the lie I’ve been living,’ or just finding out that everything’s going to be okay or just that life kind of goes on and on and on. I’ll figure something out by writing a song about it.”

Way before he got booted from Dinosaur Jr. in 1989, Barlow was struggling to find those revelations in the emotionally flailing catharsis of the early-80’s hardcore punk scene (he was in a hardcore band called Deep Wound with J Mascis). And as Dinosaur become more and more of Mascis’ solo project, Sebadoh was formed by Barlow and drummer Eric Gaffney — both of whom were living in their girlfriends’ dorm rooms at Smith college — as a way to bring the clenched aggression of hardcore to acoustic music.

“I was really affected by all the personal politics brought up in D.C. hardcore and all those lyrics like, ‘You have done me wrong, what the hell is wrong with you?!’ That kind of shit, totally accusatory and righteous. The whole sexual angle was so twisted and unnatural — very boy, very guy, very paranoid. Hardcore was all about fighting against the flow. You know” — he adopts an angry-young-man voice — “‘Fighting against the flow!‘ I mean, they had songs like that, this thing about fighting against getting old and becoming boring like everybody else. Then at some point you say, ‘This is boring.’ Everybody talking about being afraid of being boring is boring. You have to go for the real substance of life after awhile. Being involved with people and having sex and all of that is so imperfect, so you have to drop your whole male adolescent idea of perfection and order.”

Barlow, last seen wearing a Joy Division T-shirt on one of those MTV Sex in the ’90s shows and speaking with undisguised emotion about his torturous breakup and reunion with fiancée Kathleen Billus, is often tagged as the Most Sensitive Boy in Indie Rock. Not only does he tenderly admit that he is a manipulative, passive-aggressive asshole — like most wanna-be sensitive boys, from Woody Allen to Greg Dulli — but he desperately tries to convince himself to change, in song after song. And Bakesale features some of his, and under-appreciated bassist Jason Loewenstein’s, most persuasive, plugged-in arguments.

“I’ve put out a lot of stuff that just confused and alienated people, a huge chunk of songs that were verbal and musical challenges to myself, thoughts I was keeping myself busy with, nothing I had any intention of anybody grasping onto,” Barlow explains, referring to the scores of worried-over, four-track acoustic song sketches he’s released under the names Sentridoh and the Folk Implosion (with John Davis). “I was trying to be interesting, just trying to interest people. But now I’m realizing that everybody thinks you have this whole other responsibility to be coherent and this and that and blah blah blah and I’ve never considered that until recently.

“Some of my songs are positive and stuff, but some are about staring down at the ground and obsessing about stupid shit and being really teenage about it. And it is teenage in a way, like going through that time when everything’s a revelation. There are times that I think the way I write or my perception as an artist are not even a step beyond being a teenager yet. And maybe I shouldn’t give a shit. I mean, I’m 28, and you could say I’ve got another 30 years to express a whole other thing and finally just slow down and not worry so much about being prolific and making these confusing riddles of songs and be more of an ambassador instead of this person who’s constantly punching.”

One place Sebadoh has constantly punched wildly is onstage, where the band members have described themselves as “three friendly minstrels who aren’t very friendly.” “When Eric and I first started playing out it was pretty hostile,” says Barlow. “We’d put out these totally acoustic recordings and put on these totally hardcore shows, a complete maelstrom, us screaming ourselves hoarse every night.” But with longtime friend and drummer Bob Fay again replacing Gaffney, who quit for the third and apparently final time in the fall of 1993, the band’s shows became more straightforward and consistent. But not by much. “My parents came to their first show in Boston not too long ago and I acted like a fucking enormous baby, smashing my guitar, bitching, making snide remarks. It was so stupid. I always get the snowball effect when that happens, I just can’t stop being an asshole. I don’t have any idea what I should or should not do to be a more reasonable performer.”

“Lobotomy?” suggests Fay, who jokes that Barlow’s back lights up and says “Malfunction” before he bugs out. “Exactly,” Barlow laughs. “I have a serious performance glitch.”

Perhaps the most notorious glitch happened last August at the Reading Festival in England when Barlow got drunk and broke two guitars, bloodying the back of his head in the process. And that was just the beginning. “It was so weird,” he remembers. “I was freaking out and Courtney Love was sitting on the side of the stage crying and yelling at me, just going off, and I walked over to her and said, ‘What?!’ The whole situation was so bizarre that I just ran over to her. She was like, ‘Kurt loved you, he loved your band, how dare you mock him!’ She totally related the type of fit I was having onstage to Kurt, to Kurt doing a similar thing and she was like, ‘You’re the only other person I can think of who would kill himself.’ At the time, you know, I was like, that’s kind of fucked-up. Later she calmed down and mellowed out and said, ‘Look, I’m pretty fucked-up about all this right now,’ which I completely understood.”

Wearing his anxiety like a new-wave badge pinned to a vintage overcoat, Sebadoh has earned an unstable rep. A recent Conan O’Brien appearance was predictably nerve-wracking. “It was like somebody grabbed us around the arms, held on tight, and said, ‘Okay, go have fun and play.'” But Love shouldn’t stress about the band’s future. Sebadoh seems to feed on unease. “Worry is a big part of my life,” Barlow says. “I definitely worry a lot. I think it comes down to, and I was actually talking to Kath about this today, I think worrying speeds up your metabolism and creates a heightened state of consciousness where you can have great insights into things. It’s almost like living in panic all the time, which has its physical drawbacks. But it also gives you a real day-to-day charge!”